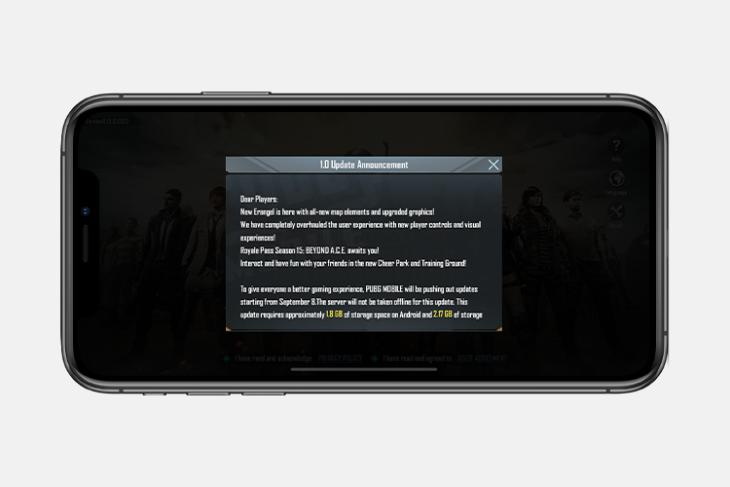 After announcing it back in late August, PUBG Mobile will finally start rolling out the ‘New Era’ update to players today. The update comes with a lot of new stuff and improvements including better graphics, new weapons, and a lot more.

Most importantly, Erangel 2.0 is coming with improved graphics, better water reflections, and more realistic vegetation and detail. The developers have also changed the structure of some buildings, including by adding basements in some houses.

Moreover, in places like Mylta Power, Quarry, and Prison, the developers have made terrain changes, new building layouts. In Quarry, particularly, there are 7 new warehouses.

Other than that, you will find trenches, barricades, abandoned tanks, and more that you can use for cover.

Livik has been improved as well. There are better textures being used for things like rocks water, and more. The Monster Truck graphics have also been improved, along with beter display of waterfalls, and improved effects during landing.

There’s also a new weapon in the map. The M1014 is a semi-automatic shotgun that loads up to 7 rounds. The shotgun will only appear in the Livik map in battle royale, or in Arena matches.

Remember Payload? It’s coming back with a bunch of improvements.

You now get fully armed vehicles including a new armed helicopter. That means you can now rain fire upon your enemies on the battlefield. Other than that, the UAZ, Dacia, Buggy, and Pickup are all armed now as well.

There’s a new AT4-A laser guided missile and 202 four-barreled rocket launcher in the mode too. Along with all that, you can also get a UAV controller, man-portable radar, and bomb suit in Payload 2.0.

The ‘New Era’ update will begin rolling out today. PUBG Mobile servers will not go offline during the update. However, bear in mind that if you have updated your game, your squad will need to be on the same version before they can team up with you, and vice versa. The update will require approximately 1.8GB space on Android and 2.17GB on iOS.

Unfortunately, we will not be able to enjoy all these new modes because the government has banned PUBG Mobile in the country.