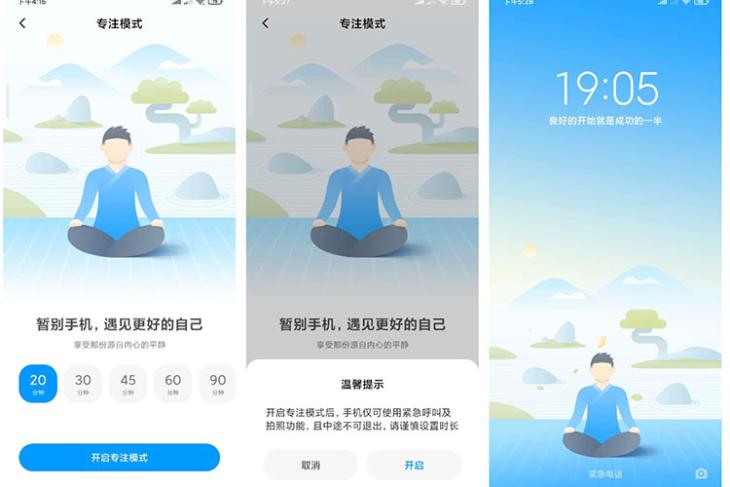 Google’s Digital Wellbeing, and Apple’s Screen Time may have kickstarted the trend in making sure that smartphone consumers remain more cautious about the amount of time they spend looking at their devices, but smartphone makers are coming up with their own iterations of the same over the last year or so.

After OnePlus included a Zen Mode on its OnePlus 7 and OnePlus 7 Pro earlier this year, Xiaomi users will also soon be able to get a similar feature on their phones according to a confirmation by Xiaomi’s MIUI head on Weibo.

The Weibo post shows off a couple of screenshots for the upcoming “Focus Mode” that’s expected to arrive on MIUI soon, and is reportedly already available in the developer ROM. The feature works similarly to OnePlus’ Zen Mode in that users will be able to choose a timespan ranging from 20 minutes to 90 minutes and their phones will be unusable for that time — kind of like a digital detox for your day.

We currently don’t know whether Xiaomi will give an option to quit the Focus Mode before the time span is over, in case the user needs to urgently access their smartphone for some reason. Hopefully that consideration will be made. There’s also currently no information regarding a release date for the feature, or which phones it will be made available on. However, it feels safe to say that smartphones that have received (or are scheduled to receive) the MIUI 11 update will get the new feature when it rolls out to the stable version of MIUI.

So, what do you think of the upcoming Focus Mode in MIUI? Is it something you think you would want on your phone? Let us know in the comments below.