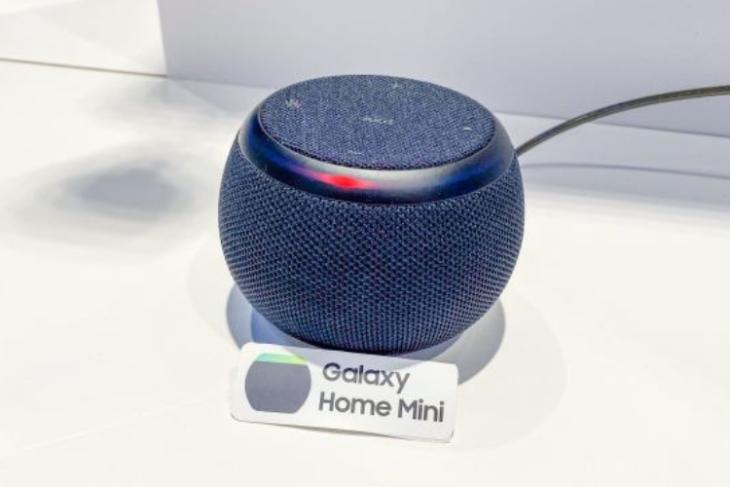 With Google Home and Amazon Echo speakers selling like hotcakes, Samsung unveiled a Bixby-powered Galaxy Home speaker to compete with them earlier last year. Yes, Galaxy Home was unveiled alongside the Galaxy Note 9 in August 2018, however, it hasn’t made its way to the market to date.

While we were waiting for the Galaxy Home to land in the market, rumors that Samsung has abandoned the bigger speaker for a smaller alternative dubbed “Galaxy Home Mini” started flooding the Internet. Well, the Korean giant has today confirmed the rumors by displaying the Galaxy Home Mini at its developer conference being held in San Jose, California.

Galaxy Home Mini has been pictured by numerous publications, who were present at the conference and it’s in line with the leaks from back in May. It’s carrying forward a similar design and form factor (pictured above) as the original Galaxy Home – minus the stool’s stand and cauldron similarities that birthed a ton of memes. It’s covered in fabric as well, with sound tuning in partnership with Samsung-owned AKG to offer an immersive sound experience.

The smart speaker will obviously be powered by the company’s voice assistant Bixby and while it’s not on par with Google Assistant or Alexa, it can offer answers to your standard queries with ease. And well, it should provide a superior sound quality than other smaller speakers in the market.

Samsung is yet to officially talk about the specifications and features of the “not-so-tiny” Galaxy Home Mini. We also have no pricing and availability details for this Bixby speaker that’s been under beta testing in South Korea over the past month or two. Samsung can either unveil it today (October 30) on stage at the conference or silently launch it as an alternative to their never launched Galaxy Home stool..err..speaker.

Samsung Galaxy Home Mini With Bixby May be Unveiled February 12