One of the signs of being a geek is that you always keep an eye on how much your device’s battery, RAM or CPU is being used by the Android system. Is it being used to its full potential or is it falling short? In this article, we’re going to take a look at some of the best Android apps that can beautifully visualize important details like battery, RAM and CPU levels of your phone, right on the home screen. So, without further ado, here are the 5 best Android Apps to visualize battery, RAM and CPU:

Energy Bar is a nice little app that shows you your phone’s battery level in form of a colorful linear strip on your status bar. Here’s a screenshot to give you an idea of what it does.

This linear strip can give you a quick overview of the battery level on your phone. Well, let’s dig into the app a bit more and check out other features that it has to offer. 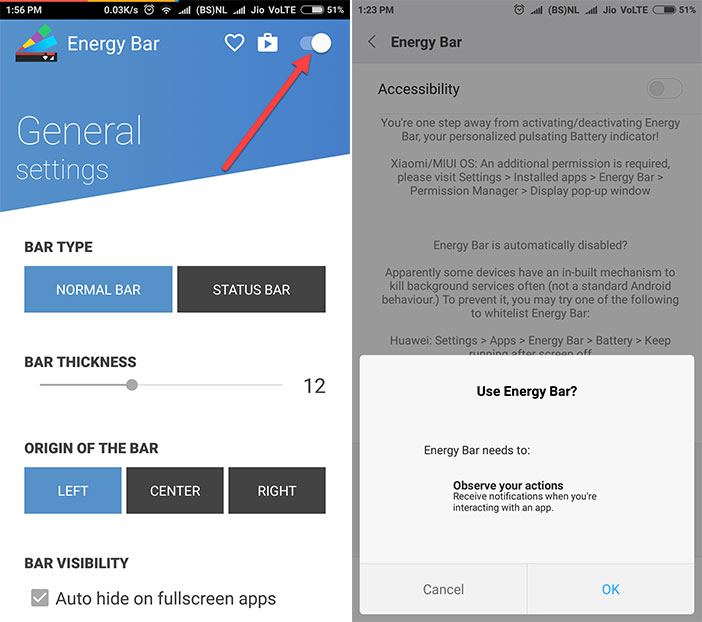 Now, coming onto the features. You can set the type of bar and instead of a linear strip, you can also get a fully covered status bar as shown below. This status bar style is only available in the in-app purchase of the developer pack.

Further, you can also select the style of the strip. You can change from the Segment style to Gradient style for a more immersive experience. And, of course, you get the freedom to change the color of the strip.

Apart from that, it also shows a cool charging animation, which you can change according to your liking. Also, a cool feature that I really liked is that it can show this colorful strip on top of full-screen apps. So, for example, if you’re playing a full-screen game in portrait mode or watching a movie, you can easily get the idea of how much battery is left.

Powerline is very similar to Energy Bar in terms of usage. It shows a colorful linear strip in the Status Bar. However, Powerline gives much more options for you to choose. In Energy Bar, you could only get the battery levels, here you can check the status of different parameters. Be it RAM, CPU, WiFi, Storage or even battery temperature.

Apart from the different options, you also get to set to multiple indicators on the Status Bar. And, not just on the status bar but, you can even set it at the top, right bottom or left edge of the screen. Start by tapping on the + icon and choose your indicator. You can only choose 2 indicators in the free version though. 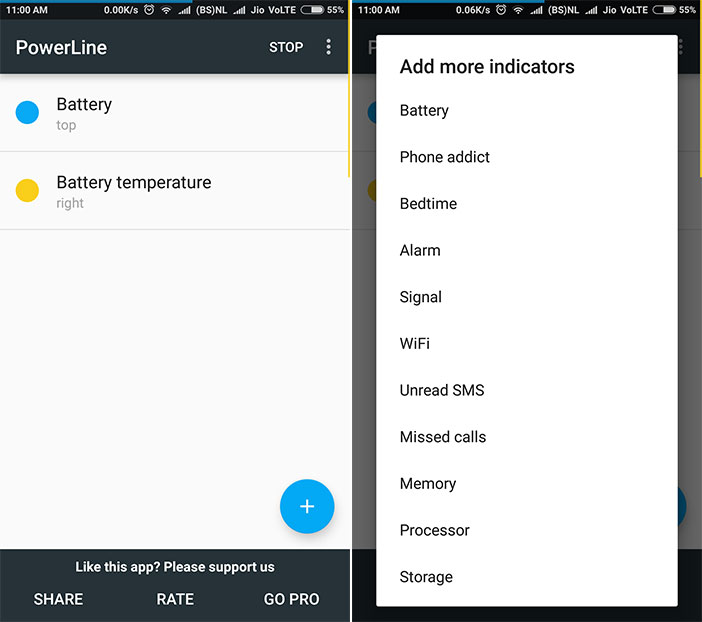 After you’ve chosen your indicator, you can then further customize its color, position and more by tapping on the indicator. You can change the style, transparency, width and alignment as shown below. Also, just like Energy Bar, you can let these strips be visible on full-screen apps and games. 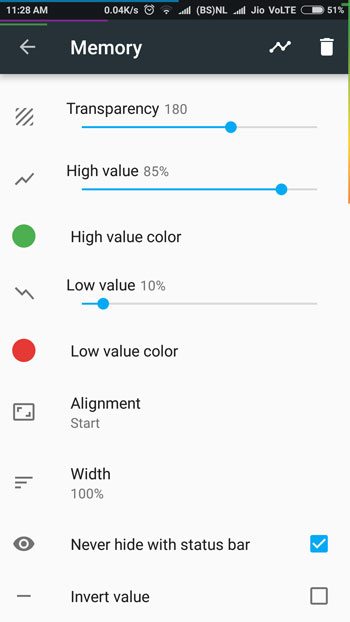 Tinycore is another app that lets you visualize the battery, RAM and CPU usage of an Android device in the status bar. In the app, you can just tap on the + icon to create your own indicator or you can use the ones gives by default. In the free version, you cannot use two or more indicators simultaneously. 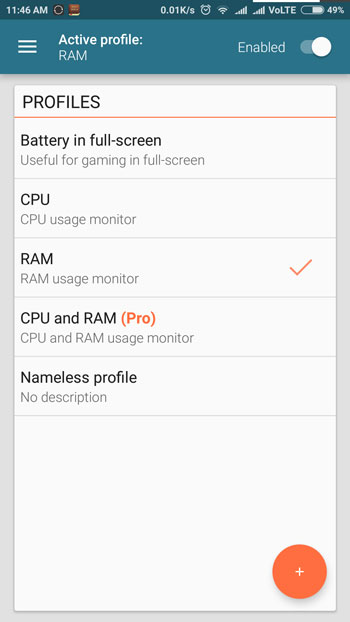 You can create profiles and give the profile a name and description. You can then set a layout for it. In the layout, you can change the position along with width and height. You’ll need the Pro version of the app to change the Stack Orientation. However, you can’t change the color of the line which I found to be necessary for such an app. 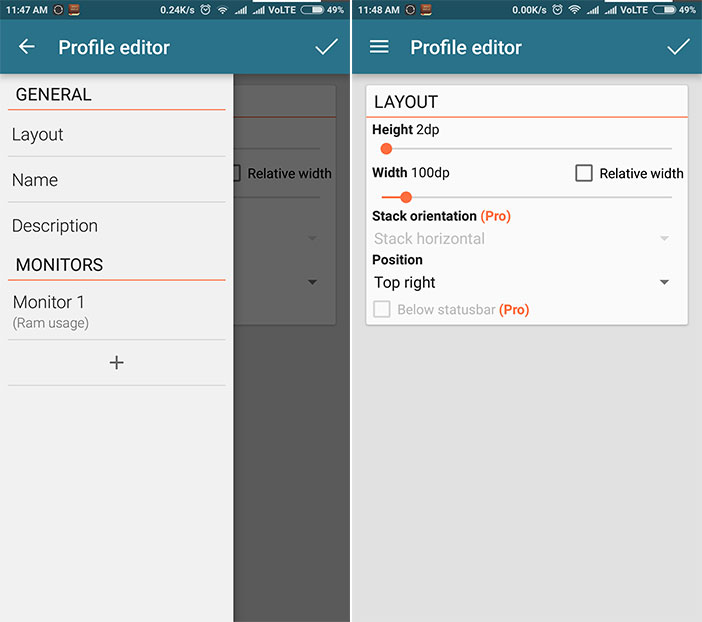 While the name “Battery Monitor” might make you think that it will show the battery details of a device, there’s much more to it. The app shows you RAM, CPU and battery status in form of widgets and tiny floating windows. 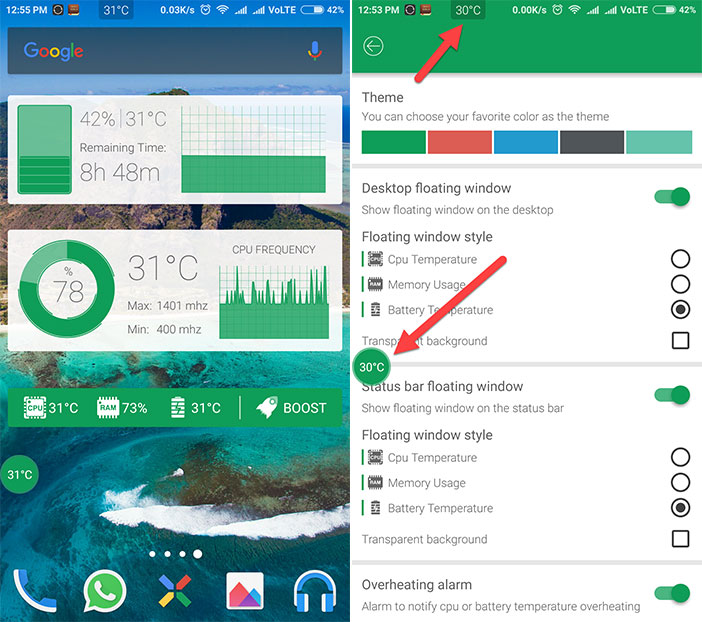 Tapping on the floating window or widget will show you more details on battery, RAM, and CPU. Apart from that, you can also set the overheating alarm for both battery and CPU. Also, you get the one-tap boost feature to clear your device’s RAM. 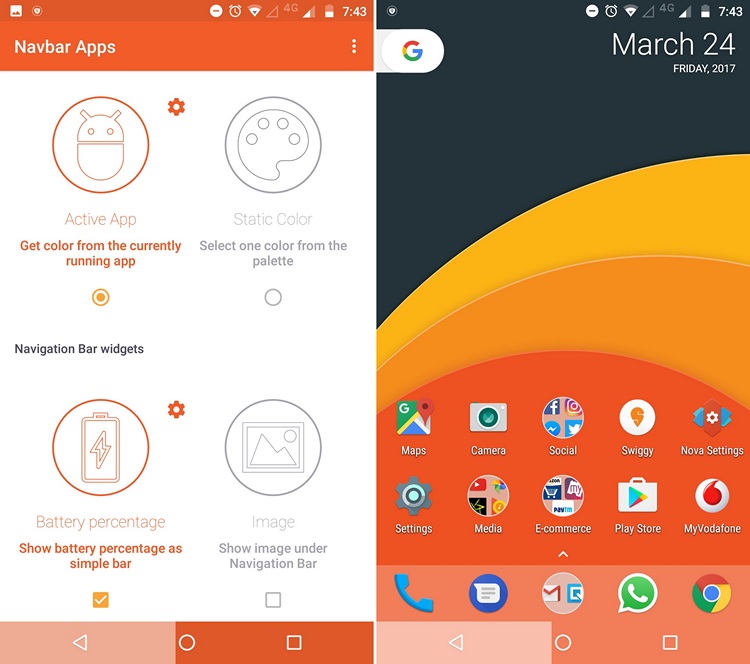 SEE ALSO: 15 Must Have Android Apps You Should Install

A Better Way to Monitor Battery, CPU and RAM Status

These were some of the apps that will help you monitor battery, RAM and CPU levels any time from the home screen. You won’t have to dig into any settings or open some app to check the status. As mentioned earlier, these apps can be very helpful if you want to monitor Battery temperature or CPU usage while playing some heavy games. So, try out these apps and do let us know your thoughts in the comments section below.

How to Check the CPU Temperature in Windows 11 (6 Methods)