Skip to content
Home News Apple Launches iPhone Self Service Repair Kits in the US; over 200 Genuine Parts Available 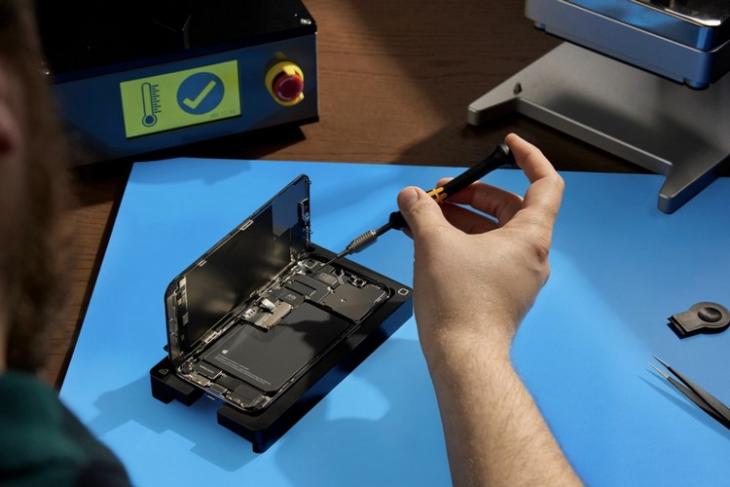 Following criticisms from customers and experts alike, Apple finally announced its own Self Service Repair program late last year, allowing end-users to repair their iPhones without the help of any Apple-authorized technician. Now, the Cupertino giant has launched the program in the US with over 200 genuine Apple parts and repair tools for iPhone models, including the iPhone 12, the iPhone 13, and the iPhone SE 2022. Here are the details!

Apple has launched a dedicated Self Service Repair store in the US to help users access a variety of genuine repair components, including displays, camera modules, batteries, taptic engines, SIM trays, and more for the iPhone 12, iPhone 13, and the iPhone SE 3.

Other than these components, Apple is also offering small parts like display cowlings, universal screws, speaker seals, and more for prices as low as $0.70 (around Rs 53). So, users with the said devices can go to Apple’s official website and order the parts they require to repair their iPhones themselves.

“Every genuine Apple part is designed and engineered for each product and goes through extensive testing to ensure the highest quality, safety, and reliability. The parts are the same ones — at the same price — as those available to Apple’s network of authorized repair providers,” Apple wrote in an official blog post.

Now, before customers get on with their iPhone repairs, Apple suggests that only people should go through the repair manual for the device they want to repair. Following this, customers can go to the Self Service Repair online store to order the parts they need for the repair. They can also send their previously damaged parts to Apple to acquire store credits on the Self Service Repair online store.

Customers who do not want to buy the specialized repair tools for a DIY repair of their iPhones can rent the tools for $49 (~Rs 3,755) a week. The week-long rental kits will be shipped to the customers in the US for free.

Apple also suggests that the Self Service Repair program is for those customers “who are experienced with the complexities of repairing electronic devices.” The company also notes that repairing iPhone models with the purchased replacement parts will not void the warranty of the devices. Although hardware damage during the repair process will not be covered in the warranty.

Furthermore, certain repair processes like display replacement will require System Configuration software to complete the process. For this, users will have to contact the Self Service Repair support via chat or phone to initiate the System Configuration software to complete the repair process. So, for customers who do not have experience in repairing electronic devices, Apple recommends them to visit an Apple-authorized service center for their repairs to avoid the DIY way.

Additionally, Apple says that it will continue to expand the Self Service Repair program to other countries and regions, including Europe, later this year. It is also confirmed that the necessary manuals, parts, and tools to self-repair M1-powered Mac computers will be added in the coming weeks.

So, what do you think about Apple’s Self Repair Program? Will you go for it? Let us know your thoughts in the comments below, and stay tuned for further updates on the same.