Skip to content
Home News Twitter’s Tweetstorm Feature is Now Rolling Out, Here is How it Works 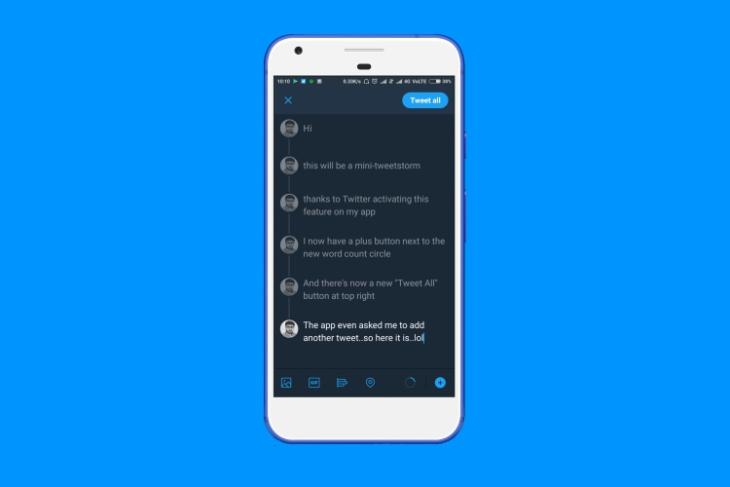 If you’re one of those individuals who love to rant and voice all their thoughts on Twitter, then you’d be elated to know that the micro-blogging platform is now making it easier for you to do so. Twitter is rolling out a new Tweetstorm feature on its Android app, which is aimed at making it easier to send out your complete statement via multiple tweets at the same time. But, how do you use it? Let’s check it out:

Once the tweetstorm feature is available in your Twitter app, it is really simple to use this functionality. Open the “new tweet” window and notice that the layout of this window has changed and a new ‘+’ icon now appears at the location where the Tweet icon was previously located. The Tweet button has been moved to the top right.

When you’re done typing your first tweet, you could tap on the “+” icon to add another tweet to your tweetstorm, where each tweet will appear as a reply to the previous one. You’ll probably be able to add an infinite number of tweets (we still need to verify it) before tweeting out a complete thread. 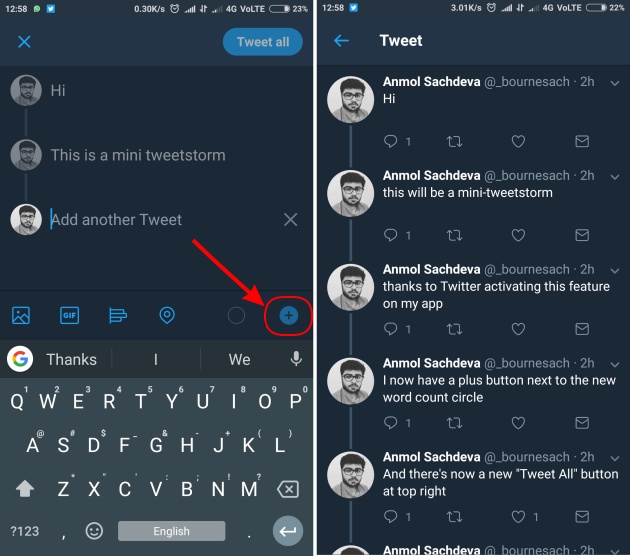 However, that’s not all. If you plan to add another new tweet to your tweetstorm, you can navigate to your profile and open the very last tweet of the tweetstorm to see yet another new addition to the Twitter Android app. There is now an “Add another Tweet” button at the bottom, connecting it to the past tweets. You can tap on the same to continue the tweetstorm, where you can again add more than one tweet. 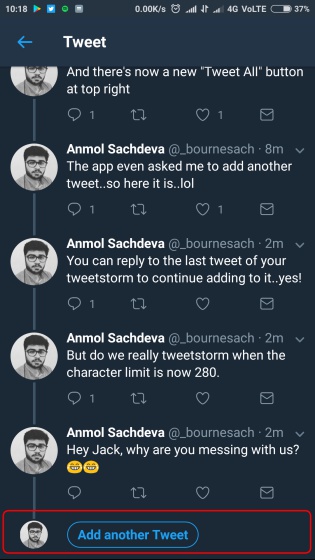 I believe the rollout of the tweetstorm feature is delayed and shouldn’t have made it to the official build. Twitter already made a huge change to its marquee feature by expanding the character limit to 280 characters and that should be enough. You can cram more thoughts into a single tweet, making the tweetstorm a bit redundant. However, it will come in handy when you’re in a mood to rant and scribble your thoughts into lengthy tweets.