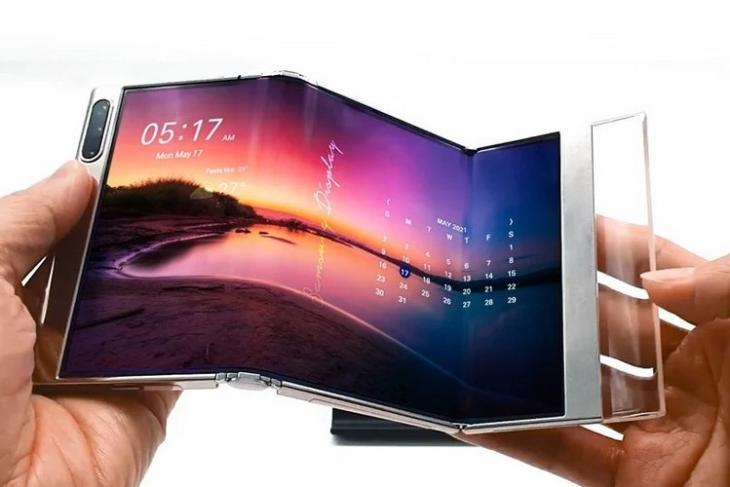 Samsung is one of the most reliable and leading manufacturers of display panels. We have seen the Korean giant provide some of the best displays in the market, including OLED and foldable displays, to the likes of Apple and Xiaomi. At SDI 2021, Samsung has teased that it’s developing its first “multi-fold” display.

Samsung Display, the display manufacturing division of the Korean giant, showcased three new kinds of display panels at the Display Week 2021 virtual exhibition. Among these, the company showed off its first bi-foldable display that comes with a two-part folding design. Samsung is calling it the S-Foldable OLED panel.

Now, ever since Samsung unveiled its first Galaxy Fold device back in 2018, the company came up with several foldable devices in the market. However, none of those have a multi-fold design. So, showing off an S-Foldable OLED panel hints that Samsung is finally working on a bi-foldable Galaxy device, which might be a part of its foldable product lineup for this year.

Apart from the bi-folding panel, Samsung Display also showed off two other prototype displays, including a slidable display panel, and a large 17-inch panel with a hinge to let you fold the device in half. The video teaser also showed off a laptop OLED display with an under-display camera. The slidable display does not come with any folds and slides out horizontally from the right side to extend the size of the screen.

On the other hand, the 17-inch foldable panel comes with a 4:3 screen ratio when unfolded and is a pretty good choice for tablets and other big-screened portable devices.

Lastly, Samsung showcased a display panel that has an under-display camera. The panel does not have any folds or sliding mechanism and is designed for future notebook devices. The Under Panel Camera (UPC), first teased earlier this year, resides at the top and under the display. This allows for a true edge-to-edge display with almost zero bezels.

So, all in all, these display panels showcase the future Samsung devices and their form factors. We might see the company come up with at least one product with these new display panels later this year. You can check out the official promo for Samsung display technologies right here: