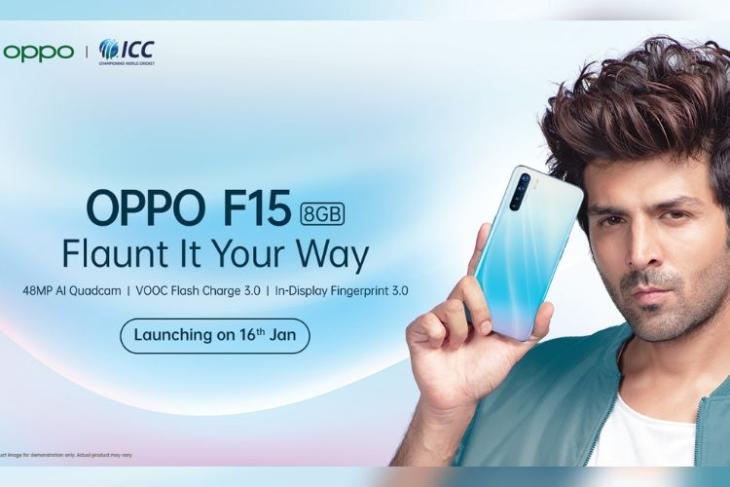 Earlier this week, Oppo teased that the upcoming launch of the Oppo F15 in India. It has today shared the launch date, i.e January 16, for the device in a teaser poster (attached above) on Amazon India. It’s a dedicated landing page for the F15 and confirms some of the specs we have speculated down below – including the presence of a 48MP AI camera, VOOC Flash Charge 3.0, and an in-display fingerprint scanner.

Oppo closed the year with the launch of the 5G-enabled Reno 3 series in China and is looking to celebrate the launch of its new F-series smartphone in India. The Oppo F15 is launching in India in January 2020, as per a teaser by uploaded by the company on YouTube today.

Oppo F15 will be a successor to the Oppo F11 that launched earlier in 2019 in India. The teaser (attached below) reveals that the device will have a sleek and trendy design along with a waterdrop notch display and quad rear-cameras. I quite like the bluish-white dual-color gradient on the rear panel but it looks pretty similar to the Redmi Note 8 from afar.

The company is promoting Oppo F15 with the “#FlauntItYourWay” hashtag to target the youth. It hasn’t shed any light on the hardware specs just yet but if you have been keeping track of recent launches, you would know that Oppo F15 appears to be a rebranded Oppo A91 that was launched in China just last week.

So yeah, we have a good idea about what the F15 will bring in tow. It features a 6.4-inch AMOLED display with a waterdrop notch and an in-display fingerprint scanner. It’s backed by the MediaTek Helio P70 chipset (same as its predecessor Oppo F11), coupled with 8GB RAM and 128GB internal storage. Oppo F15 will run Android 10-based ColorOS 7 out-of-the-box and you can check out all of the new ColorOS 7 features right here.

Oppo F15 will also boast a quad-camera setup with a 48MP primary camera, coupled with an 8MP ultra-wide camera with a 119-degree FOV, a macro lens, and a depth sensor. You will also find a 4,000mAh battery on board, with support for 20W VOOC 3.0 Flash Charge technology. You can check out the teaser video uploaded by Oppo right here:

The company is yet to reveal the official launch date for the Oppo F15 in India, but the device already sounds unexciting to me – especially when you have more powerful and capable devices like the Realme X2 or Redmi Note 8 Pro available in the market.