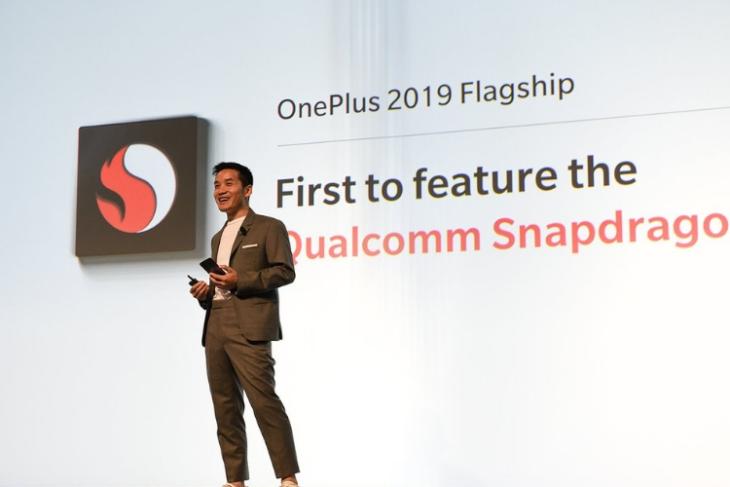 Update: OnePlus has clarified to Engadget that it will have one of the first 5G smartphones with Qualcomm Snapdragon 855 next year, and not the absolute first. We have updated our article to reflect this correction.​​​​​​​

Qualcomm’s Tech Summit is currently underway in Hawaii and we’ve now officially been introduced to the flagship Snapdragon 855 chipset. However, things took an interesting turn on the second day of the event, where OnePlus announced that it will be releasing one of the first smartphones with Snapdragon 855, which brings really killer camera features thanks to the Spectra 380 ISP.

OnePlus CEO Pete Lau took center stage at the Hawaii event to talk about the company’s partnership with Qualcomm. Lau announced that the upcoming OnePlus flagship phone will be one of the the first to be powered Snapdragon 855 chipset. Lau further added (translated by an interpreter),

We know that Snapdragon 855 is the most powerful chipset, it is definitely the one and only choice for our next flagship 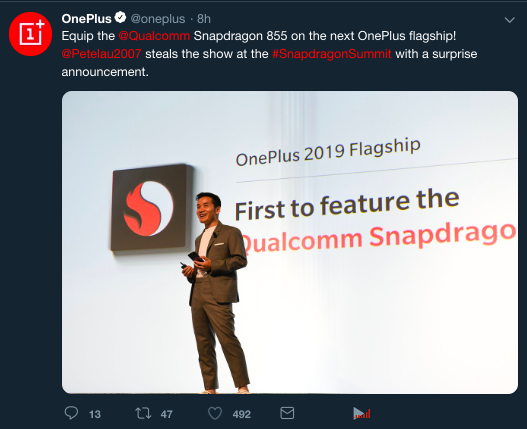 OnePlus is well-known for building some stunning and affordable flagships and there was no doubt about the company’s use of the Snapdragon 855 in its next smartphone.

OnePlus is now looking to take the lead and compete with the bigwigs of the smartphone industry. Further, OnePlus has also revealed that it will be leading the 5G wave in Europe and has partnered with telecom giant EE to announce that its upcoming Snapdragon 855 SoC-powered will be the first 5G-ready smartphone to launch in Europe.

We are taking the next step in our journey to the top of the global flagship market! OnePlus and @EE will join forces to deliver a #5G ready flagship in early 2019. https://t.co/NYppNZ6nYF #SnapdragonSummit pic.twitter.com/bXo0hulRmo

Well, I know you must be thinking that it would be the OnePlus 7 that brings along this new chipset first to the masses, however, we are probably staring at a completely new lineup of OnePlus 5G smartphones – different from the existing flagship cycle – with this announcement. CNET has further learned that the Chinese giant aims to launch its 5G phone by the end of May in 2019.

Lau also revealed that the OnePlus 5G phone will be around $200-$300 expensive than their current lineup and the company is currently testing out other unique features that may help it justify the increased price tag. Also, the Chinese giant doesn’t expect to see huge sales for their 5G smartphone but instead, wants to be at par with its competitors.

So, are you excited for the upcoming OnePlus 5G phone? Let us know in the comments down below.