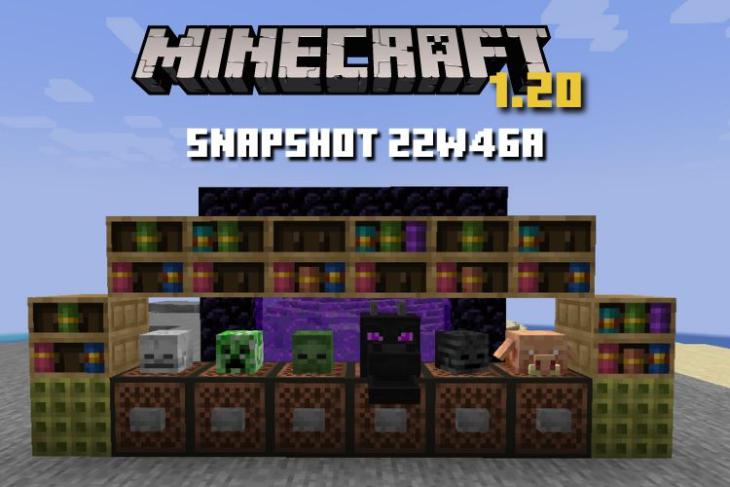 With all the features that were announced at Minecraft Live 2022 making it into the game with previous snapshots, the developers have moved on to new components, and we can’t keep calm. The latest Minecraft 1.20 snapshot 22W46A brings manual mob sounds, a long-awaited command, and a bunch of exciting updates to the game. Here’s everything you need to know about them.

Mob Heads Are Now More Than a Decoration

At this point, it is common knowledge that if you kill some mobs with a charged creeper, they end up dropping a mob head. This mob head looks exactly like the head of the dead mob and the players can wear it as a mask. But with Minecraft 1.20 snapshot 22W46A, you can also use these mob heads on top of a Noteblock to play mob ambient sounds. These sounds are the same as natural sounds that the mob (whose mob head it is) makes naturally. For example, the creeper mob head makes the sound of an exploding creeper.

This simple yet powerful mechanic opens up possibilities for endless pranks and possibly even unique doorbells. However, the player head still doesn’t have any functionality or sound. However, this snapshot did expand the selection of mob heads in the game by adding a Piglin head to Minecraft. This new mob head flaps its ears when worn by moving players or triggered by Redstone components.

You Can Finally Make Secret Doors with Bookshelves

The chiseled bookshelves have been a fan-favorite since their announcement, and now, they’re even more useful. Before the Minecraft 1.20 snapshot 22W46A, the chiseled bookshelves followed a stack order. So, the books placed first could only be removed last from the shelf and vice versa. Now, you can pick the book you are specifically looking at on the chiseled bookshelf. As you might expect, this also means you can place any book at any spot as well. Though, the color of the book isn’t affected by the type of book you place.

However, this doesn’t mean that all spots on the chiseled bookshelf are equal. If you place a book on the top-left corner of the bookshelf, it gives out a weak Redstone signal. But placing a book in the bottom right corner triggers the strongest Redstone signal. Meanwhile, spots in between these two progressively give stronger Redstone signals while moving left to right and top to bottom.

So, with the right Redstone machine, the book placement can work like a simple trigger. With that, it’s now possible to make the teased secret bookshelf doors. A Minecraft 1.20 tutorial for the same is currently on the way, so stay tuned to be one of the first ones to hear about it.

Ever since the inception of making a house in Minecraft, players have dreamt of creating a base with all the Minecraft biomes in it. Though, it has been an impossible task even with the best Minecraft seeds due to the diversity of biomes. But, that’s about to change. Now, if you can’t find the biome, you can just change the biome in Minecraft 1.20 snapshot 22W46A.

Yes, you read it right. With the help of the “/fillbiome” command, you can now change the biome of any select region in Minecraft. In our testing, this command also allows you to bring different biomes from one dimension to another. But this doesn’t affect the dimensional features at all. So, placing water in the Nether is still a dream.

With the game-changing stuff out of the box, here are some other important changes in Minecraft 1.20 snapshot 22W46A:

If you want to dive deeper, the official changelog has the list of all the bug fixes in snapshot 22W46A. With that said, which of these Minecraft 1.20 features excites you the most? Tell us in the comments below!