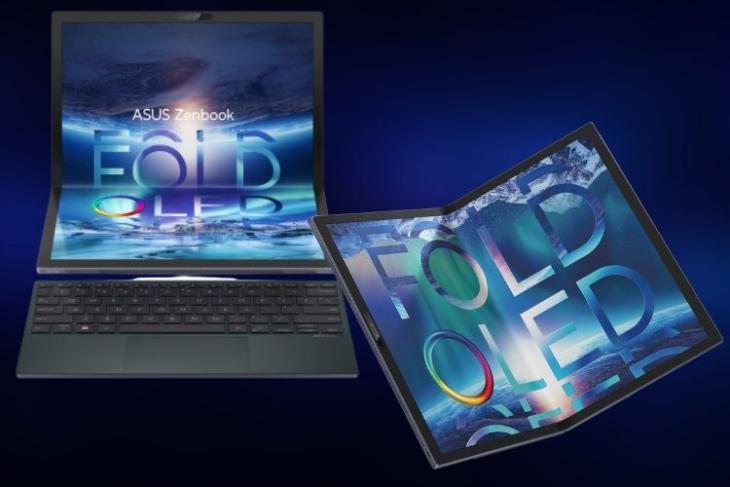 Asus has unveiled several new laptops under its premium Zenbook series at its CES 2022 launch event. This includes the world’s first-ever OLED foldable laptop, a special edition Zenbook to celebrate the 25th anniversary of the first Asus laptop sent to outer space, and many other models with upgraded specs. Let’s take a look at each of them in the following segment.

The 17.3-inch 2.5K display has been developed by Asus in partnership with Intel and BOE Technology. It is a touch-supported screen, has a maximum resolution of 1920 x 1280 pixels, and is fitted on a 180-degree hinge that enables users to unfold the device and lay it flat on a surface. For its foldable form factor, the Zenbook 17 Fold offers users two sizes of OLED displays in one device.

Furthermore, the entire flexible display is PANTONE-validated, TUV Rheinland certified, and supports Dolby Vision HDR to deliver an immersive viewing experience. Plus, the foldable OLED screen is accompanied by a quad-speaker setup certified by Harman Kardon that supports Dolby Atmos.

Under the hood, the Zenbook 17 Fold OLED packs Intel’s 12th-Gen U-series processors paired with Intel Xe graphics. The device can pack up to 16GB of RAM and a high-speed 1TB PCIe 4.0 SSD. It is backed by a 75Whr battery and comes with two Thunderbolt 4-supported USB-C ports that you can use to fast charge the device or connect external displays.

Other than these, the Zenbook 17 Fold OLED packs many AI-powered features, including a user-detection feature that uses an HD IR camera to detect the presence of users. The device also comes with an integrated color sensor for automatic adjustment of screen brightness and color temperature, and a 5MP webcam at the front with 3D noise reduction technology.

As for the pricing of the Asus Zenbook 17 Fold OLED, there is no information from the company as of now. However, Asus did confirm that it will be available to buy from mid-2022.

Next up is a special laptop edition that Asus unveiled to celebrate the 25th anniversary of the first-ever Asus laptop that was sent to the Mir Space Station, the Asus P6300. The device spent more than 600 days in orbit without getting damaged or malfunctioning.

The Asus Zenbook 14X OLED Space Edition pays homage to the P6300, featuring unique space-themed designs on the lid and the palm-rest, and coming in a special Zero-G Titanium colorway.

Moreover, Asus says that the device is space travel-ready as it meets US Space Systems Command Standard SMC-S-016A testing protocols. It can, as per the company, handle extreme vibrations and temperatures of up to -24-degree Celcius and up to 61-degree Celcius.

Another cool thing about the device is that it comes with a special ZenView smart display, which is a small 3.5-inch OLED display, fitted on top of the lid of the laptop. Users can showcase customized messages, themes, animations, and more on this companion display. Coming to the primary display, it is a 14-inch OLED screen with a 16:10 aspect ratio, a 90Hz refresh rate, and a maximum resolution of 2880 x 1080 pixels. It is Pantone validated and certified as a VESA DisplayHDR 500, and also supports 100% DCI-P3 color gamut.

Asus will release the special Zenbook 14X OLED Space Edition in the second quarter of 2022, and the pricing will be announced at the time.

The company has also updated its existing Zenbook models, including the Zenbook 14 OLED, Zenbook Pro Duo 15 OLED, and the Zenbook 14X OLED with the latest and greatest components from Intel, AMD, and Nvidia.

The chassis is designed to be durable and meets the MIL-STD-810H standard. The device comes in two color variants – Aqua Celadon and Ponder Blue. Other than these, the device features Asus’ NumPad 2.0 technology, a fingerprint sensor on the power button, an HD webcam with 3D Noise Reduction technology, and more.

Now, coming to the refreshed Zenbook Pro Duo 15 OLED, the dual-screen device now comes with up to the latest 12th-Gen Intel Core i9 H-series processors, along with Thunderbolt 4-supported ports, and Wi-Fi 6E technology.

The Zenbook 14X OLED, on the other hand, can now feature up to 12th-Gen Intel Core i7 P-series processors or Intel Core i9 H-series CPUs paired with either Intel Xe graphics or Nvidia GeForce MX550 GPU. Both the models now also support Wi-Fi 6E for improved wireless connectivity.