WhatsApp has today rolled out a new update for iOS devices, adding some nifty features and improvements to its messaging app. This update (build #2.18.90) brings along the ability to search Status updates, expand media notifications, and let users know when a suspicious link is shared with them.

Starting off, if you have a ton of WhatsApp contacts who regularly post updates through the Status feature then it becomes to filter out the stories that you’d like to watch. Thus, WhatsApp has now given you the ability to swipe down in the Status tab and search for contacts whose Status updates you want to view. 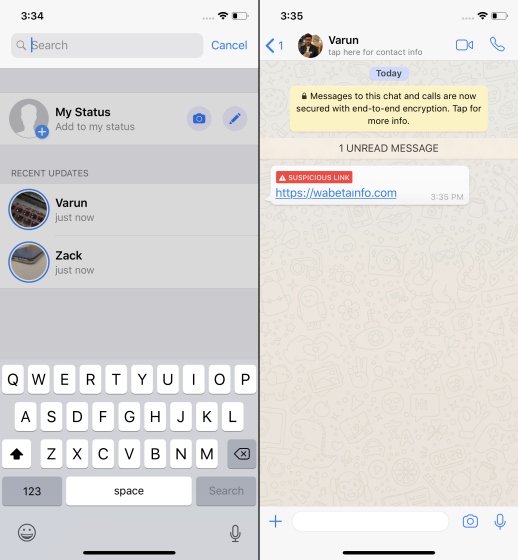 Next, WhatsApp is expanding its ‘suspicious link detection‘ feature beyond Android. It has been designed to make users aware of links which could be potentially malicious – based on the WhatsApp’s scans. You will see a red label saying ‘Suspicious Link’ at the top of the link preview to alert you of the same, suggesting you not open it.

The suspicious link detection feature is part of the company’s effort to curb the spread of misleading news and hoaxes in India, where it is currently faced with a lot of criticism for the wide-spread mob lynchings. This also blocks links to phishing sites, and fake banking sites.

Finally, WhatsApp for iOS has also added a notification extension feature that will allow iPhone users to 3D touch a media notification (including an image or GIF) and view the content right from the notification panel. You can also choose to swipe left on this notification and tap the ‘View’ option to see the media file right then and there.

This is going to make it simpler for users, running iOS 10 or higher, to sneakily check replies without jumping into WhatsApp. The update is live on the Apple App Store and should be available to iPhone users right away.