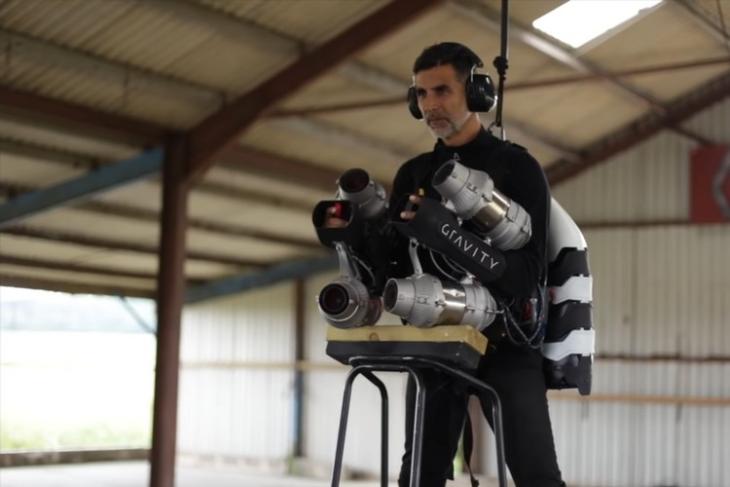 Every Bollywood fan around the world would know Akshay Kumar as one of the veteran actors of the industry. However, one of the lesser facts about the actor is that he is also great at stunts. So, after performing his stunts in films on his own, the actor has now learned to fly in a jet suit, much like we saw with Jetman Dubai, by collaborating with Gravity Industries.

Gravity Industries is a team of aeronautic engineers in a quest to build a human jet suit to help people fly. Founder and CEO, Richard Browning started the company back in 2017 and has already made many working suits with wings that help people fly around the skies without any boundaries, much like Ironman!

In a recently published video (below) titled “Akshay Kumar Learning to Fly a Jet Suit!”, we can see the Bollywood star put on a jet suit and try to take off in the air.

Now, when Akshay arrived at the Gravity Training Facility situated in an undisclosed location in the United Kingdom, he was greeted by a flying Richard Browning who flew alongside the car with a jet suit strapped to himself.

Just after arriving at the facility, Kumar began his training right away. One of the engineers from Gravity started the first lesson by explaining the controls of the jet suit like how to start the engine or how to stop it by using a “kill switch” and a trigger.

Now, Gravity’s jet suits use a 1000bhp of Jet Engine power and the natural balance of a human being to help a person fly. So, the actor rehearsed some thrust-vectoring moves to control the jet suit while in-flight. After some free-hand moves, Akshay was given the opportunity to suit up in one of the jet suits.

Initially, the power of the jet engines was set to 40% to give the actor the idea of the amount of power. However, this power was increased to 60% once Akshay became comfortable with the suit

Unfortunately, we did not see the actor actually fly in the jet suit as it was only the first training session of the actor. However, when Kumar tried to control his balance on a stage wearing a harness and the jet suit, he got a lot of appreciation for his efforts as a first-timer

You can check out the video on Gravity Industries’ YouTube channel or simply click the play button above.