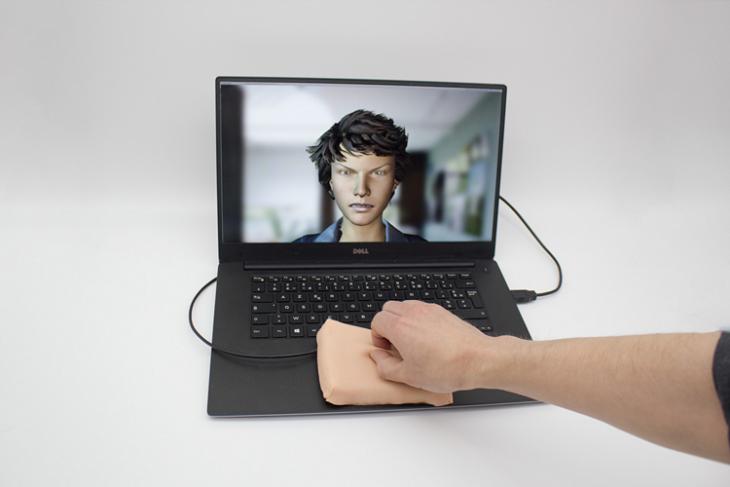 Researchers from the University of Bristol have come up with an ultra-realistic take on synthetic skin called Skin-On Interface. The prototypes developed by the researchers can detect and respond to touch gestures.

“Skin-On Interfaces are sensitive skin-like input methods than can be added to existing devices to increase their capabilities. In this project, I wanted to make available the perfect human interface that is the skin for existing devices.”, says Marc Teyssier, one of the members of the research team.

The researchers claim to have followed a “bio-driven approach” for designing the artificial skin. Skin-On interfaces are developed by packing an electrode layer of conductive threads in between two layers of silicon that resembles human skin.

Researchers propose a few use-cases for Skin-On including phone case, watch strap, and touchpad. In the demo video, Skin-On recognized various gestures including pinching, slapping, tickling, tapping, pressure sensitivity and so on. Take a look at the demo video below.

In case you’re curious and interested to replicate the steps to develop Skin-On interface yourself, you may do so by following the steps as instructed by the researchers here. Well, at least, you can flaunt your own customized slappable phone case if you succeed.

If this technology is as promising as it sounds, it might be even adopted in the next humanoid. In fact, using it in humanoids seems to be the best use-case for this technology rather than just making a touch-sensitive phone case or watch strap. If implemented efficiently, Skin-On has the potential to expand the functionality of humanoids.

So, what do you think of the Skin-On interface? Let us know your thoughts in the comments.

Japanese Researchers Made a Robot Kid That Can Feel Pain