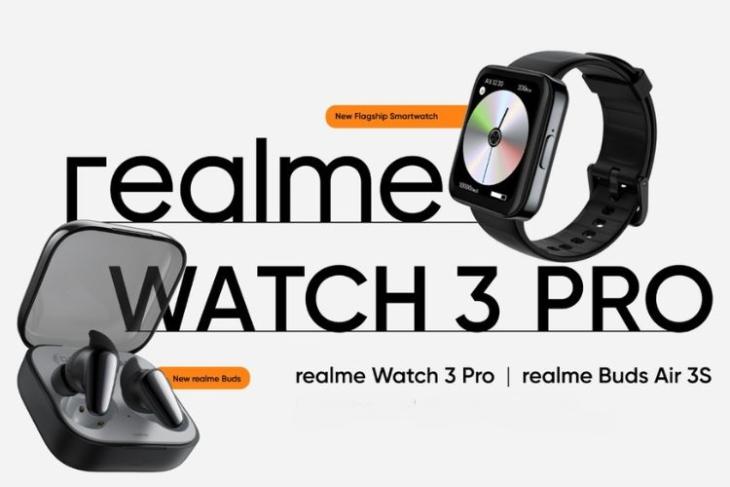 Realme recently introduced the Watch 3 and is now set to launch the Watch 3 Pro in India. The company has revealed that the Realme Watch 3 Pro, alongside the Buds Air 3s, will arrive on September 6. Here’s what to expect.

Both the Realme Watch 3 Pro and the Buds Air 3s TWS will launch in India on September 6 at 12:30 pm. This will be a digital launch, which will be live-streamed via Realme India’s YouTube channel. Expect real-time updates on the company’s Twitter handle too.

The company has also revealed a few details about both its upcoming products. It is revealed that the Realme Watch 3 Pro will be its flagship smartwatch, coming with AI ENC-enabled Bluetooth calling with support for a “high-performance” mic and speaker. This functionality is also available on the Watch 3.

It will feature a square dial and a Large AMOLED display, which will be slightly curved. The display will support a 68,7% screen-to-body ratio and a peak brightness of 500 nits. There will be support for multi-system standalone GPS too.

Apart from this, expect the inclusion of various health features like a heart rate sensor, a SpO2 sensor, various sports modes, and much more. It could be priced slightly higher than the Realme Watch 3 but could still fall under Rs 5,000.

As for the Realme Buds Air 3s, it comes with an in-ear design (with silicon ear wing tips) with a really small stem and has a square-shaped charging case. The earbuds support an 11mm Triple Titanium Bass Driver, a 4-mic arrangement, AI ENC for calls, customized EQ tuning via the Realme Link app, and much more. These could be priced under Rs 5,000 too.

To get a more conclusive idea about the upcoming Realme Watch 3 Pro and the Buds Air 3s, stay tuned to this space.