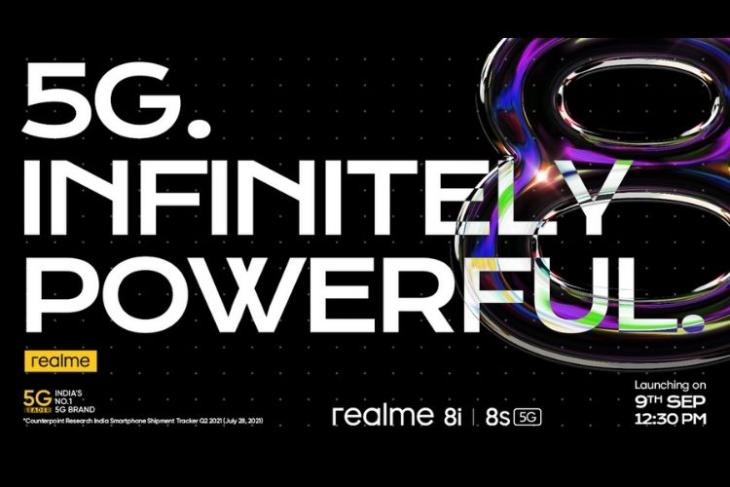 After launching the Realme 8 series with advanced cameras and large batteries earlier this year, Realme is now preparing to launch two new devices under the said series. Dubbed as the Realme 8s 5G and Realme 8i, the company will launch these devices at a virtual event on September 9 in India. These devices will come with MediaTek processors, 120Hz displays, and other modern technologies. So, let’s take a look at some of the expected specs and features of the upcoming Realme devices.

Realme 8s 5G and Realme 8 to Launch in India

Now, ahead of their official launch, both the Realme 8s 5G and the Realme 8i’s designs have been leaked online. You can check out the renders of both the devices (courtesy of OnLeaks) attached below. Other than that, we also have a general idea about the expected specs and features.

Starting with the Realme 8s 5G, the device will be the first smartphone that will come with a MediaTek Dimensity 810 chipset, which is a 5G-supported chipset that was announced last month. It is an octa-core processor and built using the 6nm process. The Realme 8i, on the other hand, will pack the MediaTek Helio G96 processor.

Coming to the display, we can expect the Realme 8s 5G to come with a 6.5-inch Full-HD+ display with support for a 90Hz refresh rate, while the Realme 8i will offer a 6.59-inch Full-HD+ panel with support for a 120Hz refresh rate. As for the cameras, the 8s is rumored to feature a triple camera setup, including a primary 64MP sensor, at the back. The Realme 8i will also have a triple camera setup, including a 50MP primary camera, a 2MP depth sensor, and a 2MP macro sensor. For selfies, both the devices are expected to feature a 16MP punch-hole camera on the front.

Turning to the batteries, both the Realme 8s 5G and Realme 8i are expected to pack 5,000mAh batteries with support for 33W fast charging. These devices will also feature a USB-C port for charging and data transfer and a 3.5mm audio jack. Both the devices are also expected to run Realme UI 2.0 based on Android 11 out-of-the-box.

Other than these, Realme stated that the launch of these two devices will further solidify its position in the country. However, the company did not reveal information regarding the price and availability. So, we will know more about the Realme 8s 5G and Realme 8i once both the devices are launched on September 9 at 12:30 PM in India.

You Can Exchange Your Realme 8s for the Lava Agni 5G for Free; Here’s How!