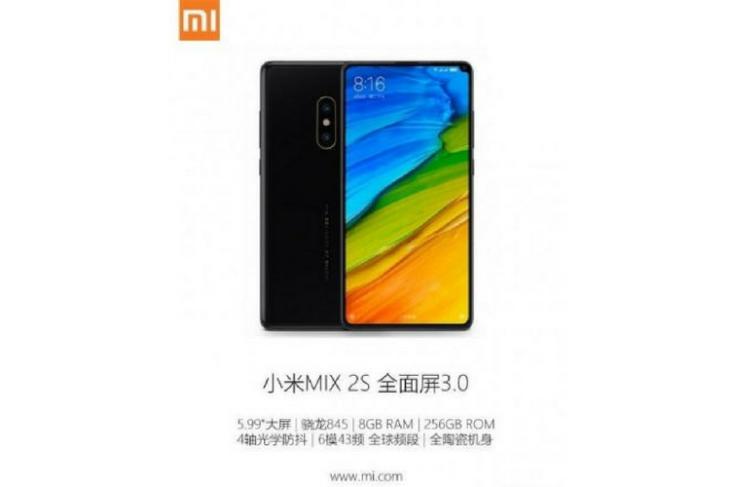 Xiaomi Mi MIX 2S, an updated version of company’s second-generation Mi MIX smartphone, has been in the news for a long time now. It was being speculated that the company is looking to launch this device in the market; however, there was no official confirmation on the same. But now, the folks over at XDA Developers have confirmed that the smartphone does exist, and they have also managed to learn some of its key features and specifications, thanks to a leaked firmware file.

XDA Developers referred to unreleased firmware files as the source and said that the upcoming Mi MIX 2S is codenamed “Polaris.” Reportedly, the smartphone is said to be powered by Qualcomm’s Snapdragon 845 SoC and pack a 3,400mAh battery.

Furthermore, the report also notes that the smartphone will run on Android 8.0 Oreo out of the box and could be compatible with Project Treble as well. In addition to that, the Mi MIX 2S is also said to sports AI camera features to support scene recognition feature similar to one found on Huawei Mate 10 and others. Speaking of the image sensors, the binary files indicates that the device will use Sony IMX363 image sensor.

The firmware files also confirm that the smartphone will support Dual-SIM and IR blaster. Overall, the new Mi MIX 2S is expected to a refreshed variant and hopefully it’ll overcome all the shortcomings of Mi MIX 2. That being said, it is unclear why Xiaomi is stepping out their usual product cycle to launch this smartphone. In case you’re wondering, the Mi MIX 2 was debuted just a couple of months back. You can also check out our full review on that if you’re interested.

Lastly, it is worth making a note that the new Mi MIX 2S is expected to be unveiled at MWC 2018 at the end of the month. So, are you excited for the new refreshed Mi MIX 2? Let us know by dropping a comment down below.