Skip to content
Home News Intel Core i9 for Laptops Announced; 8th-Gen Core i5+, i7+ and i9+ with Optane Memory Also Unveiled 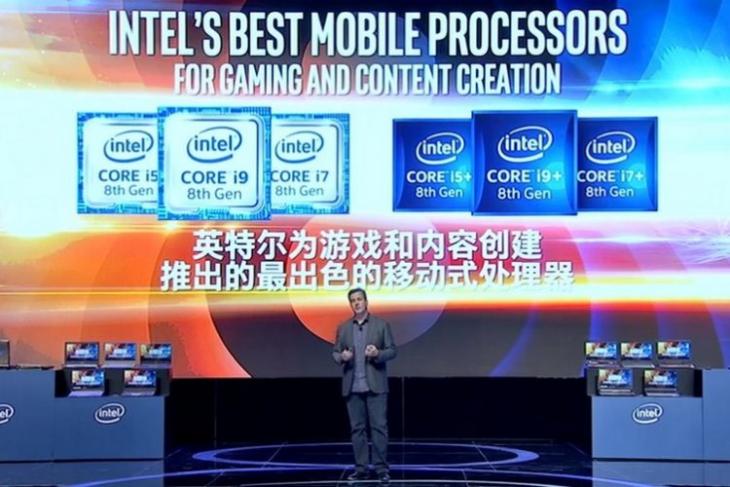 The new Intel processors are primarily aimed at gamers and content creators, and are claimed to provide a 41% higher frame rates in gaming and 59% speed improvement in heavy 4K video editing tasks.

The biggest announcement is the arrival of Intel’s top-of-the-line Core i9 processor on laptops, which is the first mobile processor in Intel’s line-up to feature 6 cores and 12 threads, and comes fully unlocked for facilitating overclocking to boost performance.

The Core i9 processor for laptops comes with Intel’s proprietary Thermal Velocity Boost technology, which allows users to increase the clock frequency by to 200 Mhz above the normal turbo frequency when extra performance bump is needed. Intel claims that the technology allows for a turbo clock frequency of up to 4.8 GHz on laptops, and also showcased a Dell Alienware gaming laptop which had an astonishing clock speed of 5GHz on stage.

Intel has also unveiled the 8th Gen Intel Core i5+, i7+ and i9+ family of processors for laptops and desktop PCs, which come with Intel’s Optane memory. This line-up of Optane-powered processors bumps the performance of storage units onboard the system and come with the company’s Data Drive Acceleration feature to enhances the data loading speed on HDD drives.

At the event, Intel announced that Acer, Asus, Dell, Gigabyte, HP, Lenovo, MSI, and Samsung are among the first adopters of Intel’s new 8th Gen Core ‘i’ series processors, and will soon launch devices equipped with the new processors in multiple markets.

You can get detailed technical information about the new line-up of Intel processors here.