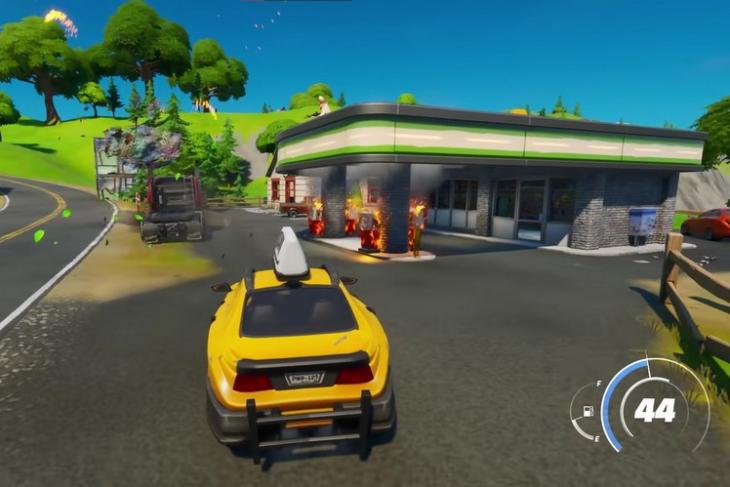 Epic Games added a bunch of new things to their flagship title, Fortnite with the latest “Joyride” update. Amongst other things, the new update to the game brought a line of cars for the players to escape “the storm” in the game. So now, players are using this opportunity to open their own in-game gas stations to fill up the cars of their “enemies”.

Now, with the new update, Fortnite players got four new in-game vehicles along with gas-stations scattered all around the map. So, players can now ride around the map along with their squadmates. However, when their car runs out of gas, the players need to take the car to the dedicated gas-stations to fill it up again.

So, after the update, many players have opened up their own in-game gas stations to help other players get fun rides in their cars. Now, considering that Fortnite is a “Battle Royale” which emphasizes gun-fights and violence, it is good to see players helping other players and being non-toxic.

Now, to make the gas stations more authentic, players are also using the game’s construction feature to build drive-in-like housings around the in-game gas stations. So now, enemy players are taking their cars to these drive-in gas stations and using one of the many emotes in the game to show the “gas station owner” that they need gas.

As a result of this practice, many younger players in the game are starting to enjoy Fortnite as “enemy” players are coming to their gas stations and not killing them.

“I heard lots of happy squealing noises coming from my son’s room yesterday. He bought the crash test dummy [skin] and was so happy to be pumping gas for cars in solo. He was super psyched because a bunch of players came and got gas and didn’t kill him. I know it’s battle royale but I just wanted to say thanks to those who do things like this. You made my son’s day!!!”, wrote megareads781 on a Reddit post by another Fortniter who shared a video of him getting gas and essentials from another player’s in-game gas station.