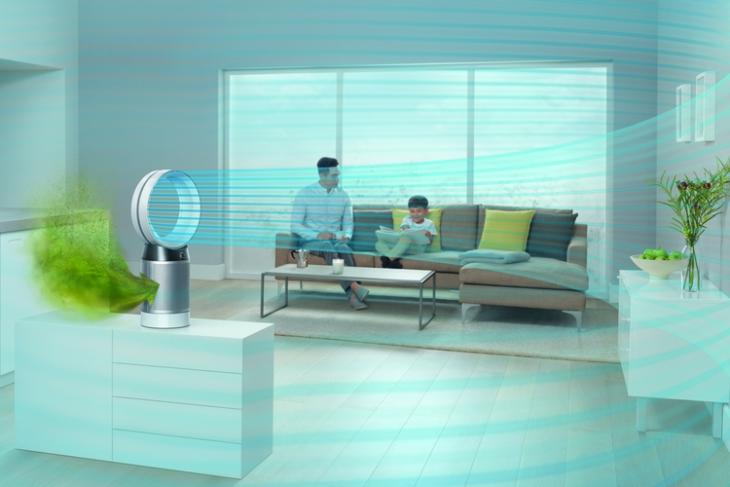 The Cyclone V10 is powered by the company’s super-fast V10 motor that can run at a whopping 125,000 rpm top-speed. According to the company’s press release, the motor enables the air inside each of the fourteen cyclones to travel at a speed up to 190 kmph, creating a suction so powerful that it can separate ultra-fine dust particles up to the size of 1 micron. The company further claims that the device can suck 99.97 percent particles as small as 0.3 microns.

The Cyclone V10 Absolute Pro features a gun-like trigger instead of an on/off switch for more responsive controls. The device comes with an enhanced battery life of 1 hour (“60 minutes of fade-free suction”, the company promises), and offers seven additional attachments in addition to the motorized cleaner heads to help clean various surfaces not only at home, but also inside cars.

With air quality in many cities in India seemingly getting worse by the day, the new Pure Cool air purifier comes with the promise of fresher, more breathable air that would help users avoid serious health problems in the long run. The device features an LCD panel that displays, in real time, the air quality along with the pollutants, such as PM 2.5, PM 10, VOCs and NO2.

According to the company’s press release, the filtering system of the device uses a 360-degree fully-sealed filter system that combines a tris-coated activated carbon filter to remove gases, and a Glass HEPA that can capture up to 99.95 per cent microscopic particles and pollutants as small as 0.1 microns. The device also comes with the Air Multiplier technology and 350-degree oscillation that the company claims can deliver purified air to every corner of the room.

The Dyson Link app (available for free on Android and iOS) enables users to track the pollution, temperature and humidity levels both indoors and outdoor. The app can also be used to control the air purifiers, set purifying schedules and see how many hours of filter life you have left, says the company. Dyson has also tied up with BreezoMeter to help users get what it calls a ‘hyperlocal & real-time outdoor air quality data’ on its app.

While the new Pure Cool Tower air purifier is priced at Rs 43,900, the desk variant of the device is available for Rs 36,900. They will both be available in Iron Blue and White Silver color variants. The Cyclone V10 Absolute Pro cord-free vacuum cleaner, meanwhile, comes with a price-tag of Rs. 44,900.

Dyson Corrale is a Hair Straightener that Costs Rs. 37,000