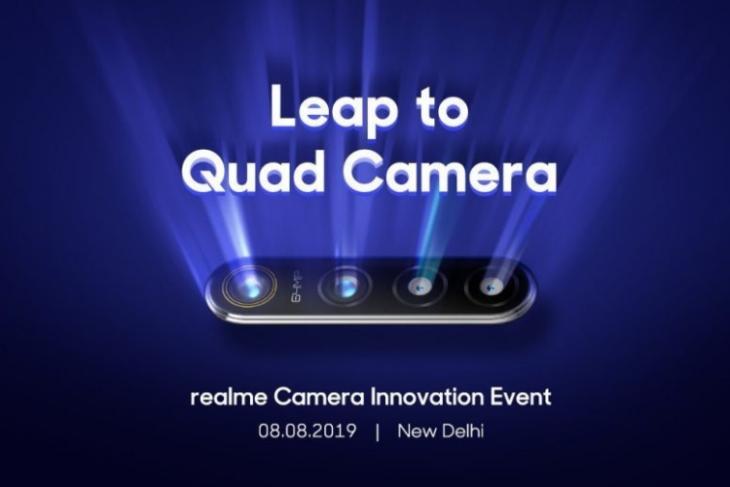 Realme first teased that it was working on a 64MP camera smartphone back in June. We have since seen Xiaomi tease that it’s also experimenting with this new high-megapixels sensor. However, it seems like Realme wants to follow the lead of its parent and display innovation to the masses before anyone else.

Realme today annoucned that it will show off a 64MP quad-camera smartphone on August 8 at an event in New Delhi. Called the ‘Realme Camera Innovation Event,’ this event will see the company tout that it’s taking an upper hand over Xiaomi by bringing 64MP sensors on its smartphones before them.

This would also be a golden chance for Realme to boast that it’s the first one to bring a 64MP camera sensor to India. It’s already confirmed that our country will get it before China this time – unlike the 48MP-laden Realme X.

Another interesting thing to notice here is that Realme hasn’t moved past dual-camera phones to date. And it is now directly making the leap to four cameras to offer a tough competition to its rivals in the premium segment. We don’t know what other sensors it plans to bake alongside the 64MP one, but an ultra-wide angle, telephoto, and a depth sensor make the most sense. This setup will offer the most variety and choice to users.

We obviously expect Realme’s first true flagship smartphone to house the quad-camera module. There’s no info available on the same right now, but who wouldn’t want to see Realme take on the Redmi K20 Pro in the budget flagship segment. We could also see a revamped RealmeOS (possibly what Realme Project X is) debut alongside this phone as well.