When it comes to receiving major updates from apps, the iPhone almost always beats Android rivals to the punch. For example, take WhatsApp fingerprint lock, it was released on iOS months before it hit Android. But that was not the case when Spotify introduced Sleep Timer a few months ago. While the music-streaming app rolled out the feature on Android devices, it kept iOS users waiting in the wing. After several months of delay, the music app has finally broken the jinx. And guess what, I’m really excited to use Spotify’s sleep timer on the iPhone. If it’s also your thing, let’s get started with this feature right away!

Set Up Sleep Timer in Spotify on iPhone and iPad

First things first, Spotify has just released Sleep Timer for iOS and iPadOS. Though it’s available worldwide, it may take some time for the update to reach everywhere. So, don’t be surprised if you don’t get the option to use it on your device. To update Spotify, head over to App Store on your iPhone or iPad > Today tab > Profile > Available Updates. Now, find Spotify and update it as usual.

As the process is quite similar on both iOS and Android, you can get the job done on any of your devices by following the screenshots below. With that said, let’s set up sleep timer in Spotify, shall we?

1. Launch the Spotify app on your Android or iOS device.

2. Next, start playing your favorite music. After that, open the Now Playing screen while listening to the song.

3. Next up, tap on the three dots at the top right corner.

4. Scroll down a bit and tap on Sleep Timer (with crescent moon icon). 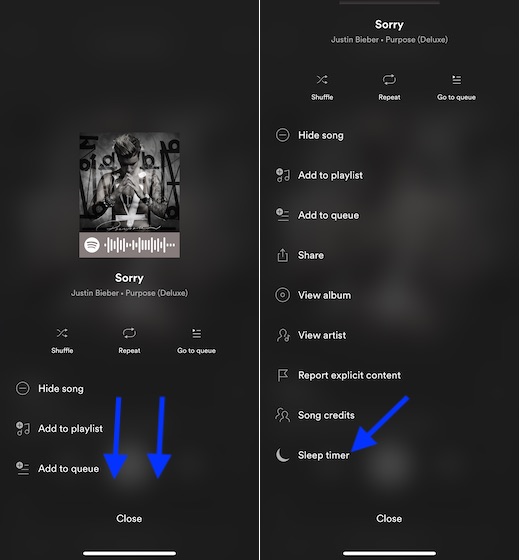 5. Finally, set the Spotify sleep timer between 5 minutes to 1 hour. 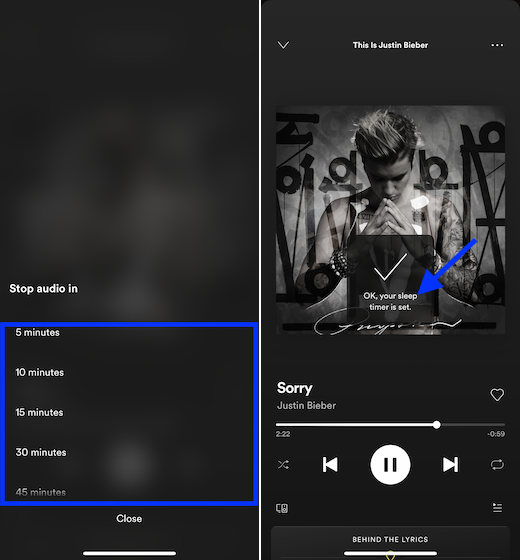 Once you have selected time, you will get a confirmation saying, “OK, your sleep timer is set.” That’s it! You are now good to go.

The music will be automatically stopped after the stipulated time. So, you can doze off peacefully while enjoying your favorite music to the fullest.

Enable Spotify Sleep Timer on Android and iOS With Ease

As I like to listen to some melodious songs before closing the eyes, I had been waiting for this feature to arrive sooner than later. On the competition front, Spotify (as of September 2019, 248 million total users) is head and shoulders above rivals like Apple Music. While Apple’s music streaming app is on track to overtake Spotify in the US, the latter has a dominating presence globally. By the way, which is your favorite music app and why? Do share your two cents with us.