Skip to content
Home News Can You Find the Cat in This Picture That Went Viral on Twitter? 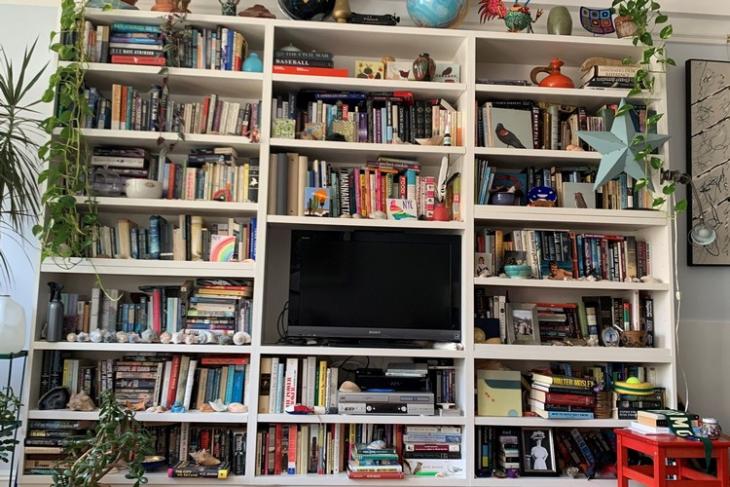 The lockdowns due to the Coronavirus have led many people to get creative in killing the indoor times. However, never have we thought that finding cats in pictures will become a way to kill time. Well, looks like it is a thing on Twitter now, as people are trying to find a cat hiding in an enormous bookshelf.

Last week, Kate Hinds, who is a planning editor at WNCY public radio, shared a picture of a bookshelf in her Manhattan apartment with the caption “Today in find the cat”. The image went viral on Twitter as netizens tried to figure out where the meowing-animal is hiding. You can check out the picture from the tweet below. Try to find the cat for yourself before I give you the spoiler!

Today in find the cat pic.twitter.com/P6soGOv8k1

Now, most of the users on Twitter went crazy trying to find the cat in that gorgeous bookshelf of Hinds’. So, some users went on to give up and compliment the bookshelf instead. On the other hand, one user thought that there was no actual cat in the picture and so she tried to find a “figurine or something”.

After numerous users gave up on finding the cat, Kate shared a close-up image of the cat hiding under the flat-screen TV in the middle of the shelf. She says that that is Norah’s (the cat) favorite summer hiding spot.

“For some reason, she goes behind the TV in the summer,” Kate told a CNET representative in an email. “She prefers to bed down with the winter hats/scarves in the colder months.”, she added.

After this picture went viral, many users started posting pictures of their cats hiding in different places. Replying to Kate, one user wrote “Ha! That’s one of our favorite games too!”.

Ha! That’s one of our favorite games too! pic.twitter.com/NXn32ca89b

Apart from the viral image, Kate has some more “find the cat” pictures on her timeline. So, if you’re into finding cats hiding in pictures, head on to her tweet’s thread to find those hiding scratchers.