Living with a slow internet connection and you can’t find a copy of the TV series you want to watch online? What if your friend tells you he has it on his phone? It would be music to your ears, but then the next problem that will come in your way would be the file transfer.

Well, If I were you, I would save my bandwidth and copy the video from his smartphone to mine. But these videos are always so huge and the traditional method like Bluetooth would fail miserably. So, for everybody who needs a solution to their wireless transfer problem, who doesn’t want to wait an hour just for a movie to copy via Bluetooth. We have put together a list of the top 7 apps to share files instantly on Android which should put these problems to bed once and for all.

SHAREit is the first app to appear on this list because, I personally use it the most and it is highly popular. It has over 100 million downloads on Play Store and there are a lot of good reviews backing it up. It uses WiFi and allows users to share any files across multiple platforms. Apart from the app on Play Store, you can also download the desktop app to share files from your phone to your PC and vice versa. 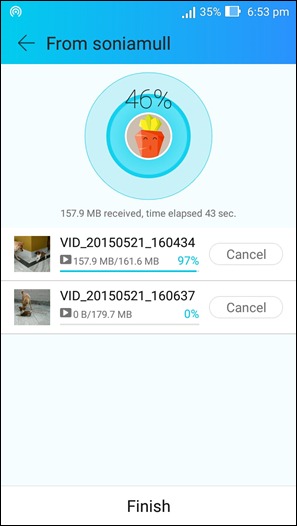 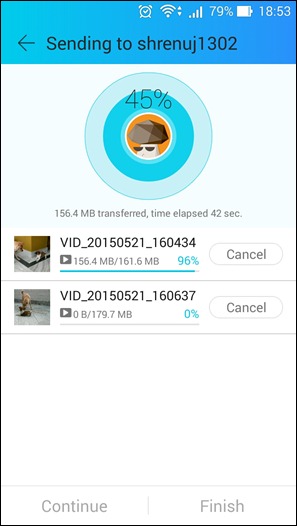 Speeds at which music, apps, movies, pictures etc. can be shared is far better than Bluetooth. It may take a few attempts to connect devices at times but it works well once it does. One special feature in SHAREit is the CLONEit option which can basically be used to copy everything from an old device to a new one.

Another popular app on the market with over 1 million downloads is SuperBeam. It uses WiFi direct to transfer files of any shape and size between two devices. So basically, what you have to do is to scan the sender’s unique QR code by using the receiver’s phone through the app itself. Once connected, the app will take care of the rest. You  can share just about anything, files and folders, music, photos, apps, videos, documents and even contacts. 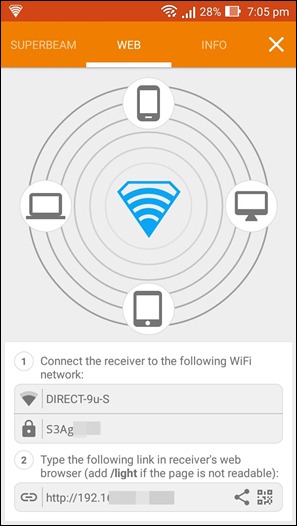 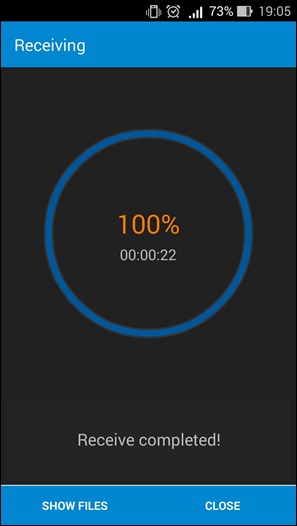 Xender is the next app on our list and it works in a similar manner to the above two, to share files using WiFi. It’s interface looks similar to that of a file explorer and you can very easily share apps, pictures, music, videos or any file or folder from your storage. It allows cross-platform transfer as well so you can transfer files between your android device, iOS, desktop and Macbook. 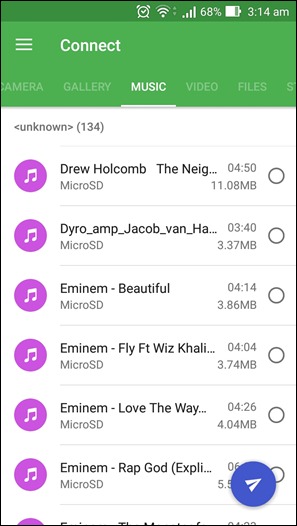 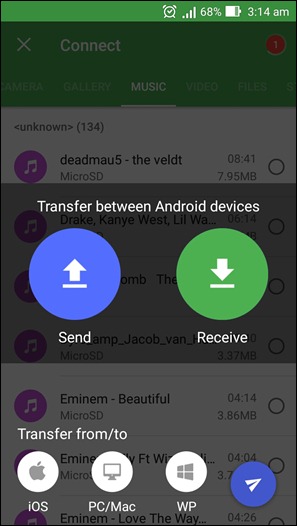 If you have to share a party video with multiple friends you don’t have to worry, Xender allows group sharing with upto 4 members in a group as well. You simply have to connect all the devices to the same WiFi network/group which is created by the sender’s phone. It is that simple. Apart from the usual, Xender also allows you to replicate data from an old phone to a new one using its Phone replicate option.

Using Zapya you can share almost everything across almost every platform. Share files across Androids, iPhones, iPads, Windows Phones, Tizen, PCs, and Mac computers using the same WiFi technology as most apps on this list. Sharing is simple and it uses the same QR code setup as SuperBeam. The sender can create a group and upto 4 receivers can join to share files instantly. 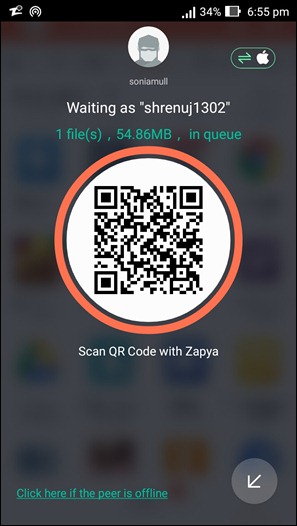 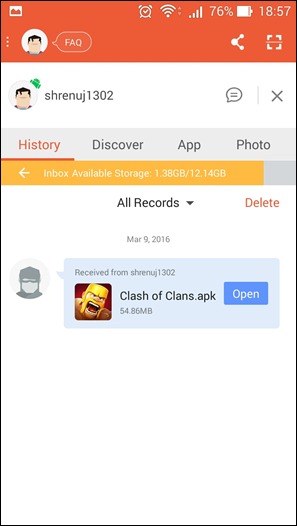 Other features include playing multiplayer games and support for multiple languages as well. If the name doesn’t sound that common to you don’t worry, it actually has over 1 million downloads on the Play store and works just fine.

5. Mesh it up! File Transfer

Yes, that exclamation mark is for real and it is there to denote just how fast and awesome this app is for sharing large files. It is relatively new on the Play Store with only around 1000-5000 downloads but it is worth being called a good file sharing app. To share any files you have two options- 1) To share files over a pre-existing WiFi network or 2) To create a new WiFi network using the senders phone, you can do this through the app itself. 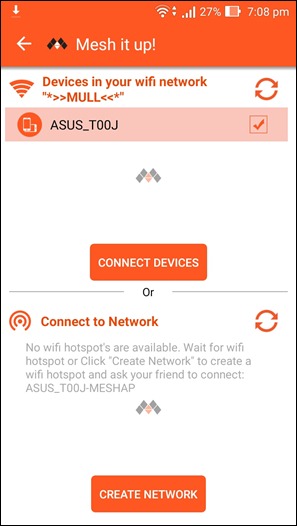 When the sender shares a file, all the other devices on the same network with Mesh it up! can easily receive it. It operates smoothly even though it is not yet popular in the Play Store and in case you are having any difficulties there is a nice “How to use” option to teach you well, how to use this app.

Honestly, in our experience CM Transfer was the fastest in connecting the two devices. It basically connected and sent the file within a couple seconds. It can be used to share all kinds of music, movies, apps, contacts, files etc. It is probably the highest rated app on the market for file sharing purposes and has over 1 million downloads to support its claim. 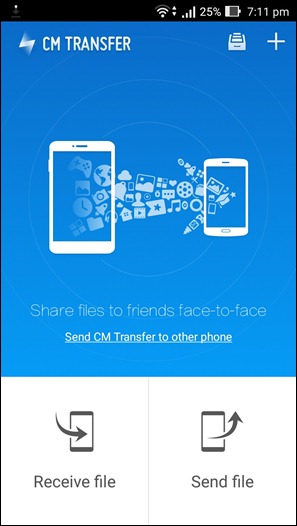 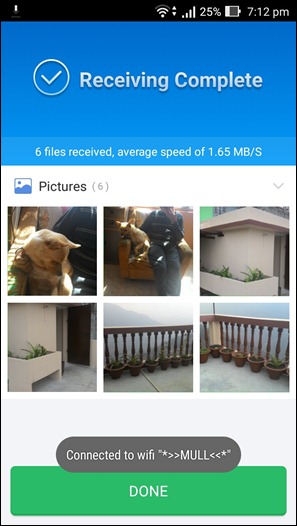 Select –> Share –> Receive, it really works that simply and that fast. If you don’t believe us, go on give it a try, you will be surprised at how simple file sharing becomes using this app.

T Share is our personal favourite. It has over 500 thousand downloads on the Play Store and a very refreshing UI. It uses WiFi to transfer music, pictures, files, videos, apps and contacts between devices using either a pre-existing WiFi network or by setting up a new one itself. It works like every other app in this list using WiFi and it looks cool, so that is just a bonus. 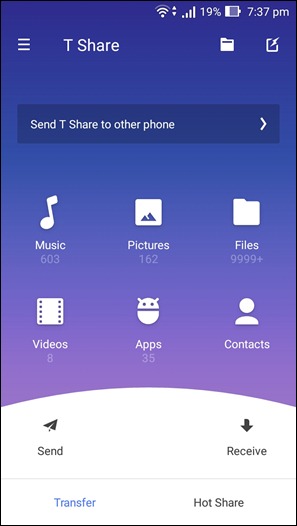 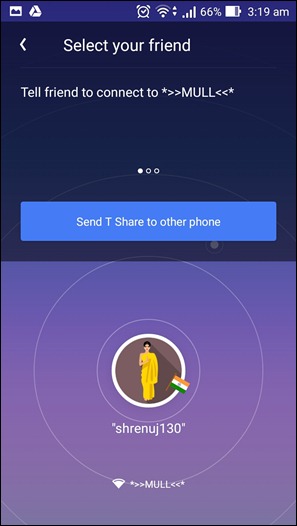 Apart from being a great file sharing app, it is also rather patriotic, to say the least. So, if you want to show your support for an app made in India you should definitely give this one a try, it will surely stand its ground against all the big names.

There it is. The 7 different apps for you to choose from. Every app uses similar WiFi technology to share and receive files and offers really great speeds so it’s not really a question of which one is better because they work in the same way. Using any of the above mentioned apps, hopefully you will remember us the next time you have a large file to share. Go on try one of these apps out, we have personally tried and tested each one to ensure only those that work get on this list. Also, remember that for small files and media transfers you can always use WhatsApp and the fact that they now even supports document transfer makes it even better. You no more need to turn to your email to send that PDF file.

How to Share Files Using iCloud File Sharing on Mac