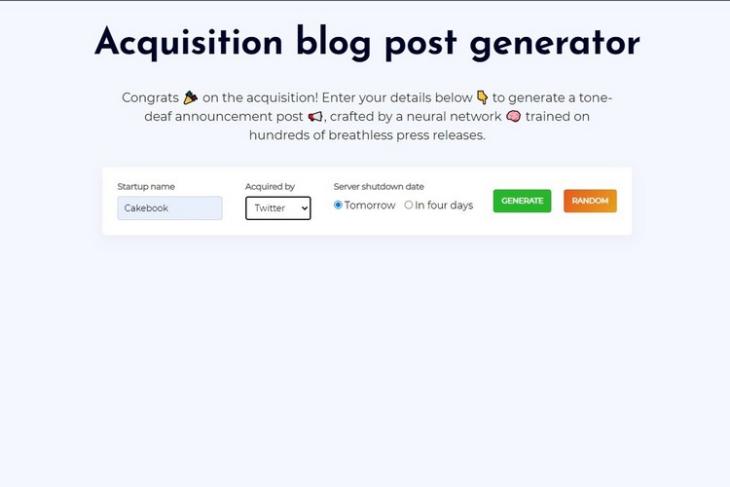 If you’re somewhat familiar with the tech industry, then you probably know that big tech companies acquire other smaller startups companies quiet often. For instance, we have all seen huge companies like Google, Apple, and Facebook acquire small startups to expand their services and R&D. And with these kinds of acquisitions comes a generic “acquisition announcement blog post” from the companies. So now, we have an AI that generates fake and hilarious “acquisition announcement” posts from big tech companies.

“ThisStartupAnnouncementDoesNotExist”, much like “ThisWebsiteWillSelfDestruct“, is a self-explanatory website from where users can generate some hilarious acquisition announcement posts which are obviously fake and just for fun.

The website uses an AI algorithm to generate the announcement posts and users can even choose the company that acquires an imaginary startup. You can even give this imaginary startup the name of your choice. However, there are only four options for the acquiring company which include Google, Twitter, Dropbox, and Airbnb. So, your acquisition post can be like “Cakebook has been acquired by Twitter”. 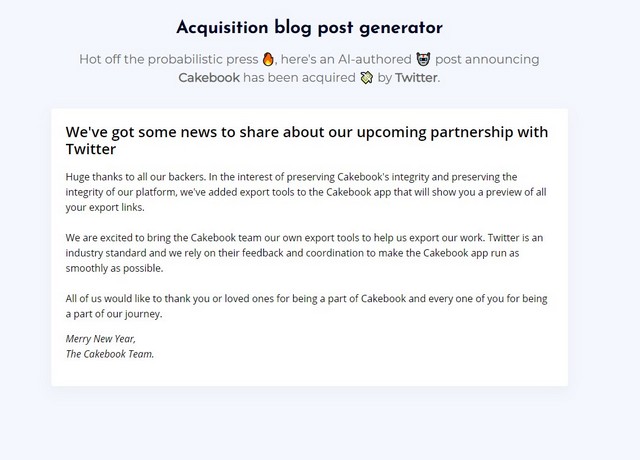 Now, creator Andrew Nisbet built this website by taking inspiration from a website called “Our Incredible Journey” which collects and stores real, official acquisition posts of big tech companies. And as these posts look more or less the same, Nisbet fed the generator with over a hundred of acquisition announcement posts from companies.

“In each post, the founders struggle to contain their excitement and express endless gratitude to their users,”, wrote Nisbet. “But, inevitably stuffed into the last paragraph of the blog post is the announcement that the service is being shut down in like a week even though the founders are millionaires now on the back of their users’ loyalty.“, he further added

The developer used various AI systems like OpenAI’s GPT-2 text generator that was also used by the “song-writing AI” we saw earlier this year. And AI-generators like this is not an uncommon thing on the internet. However, the concept of this website is a unique one.

So, if you want to generate an “acquisition post” for your “imaginary” company, head over to “ThisStartupAnnouncementDoesNotExist”.