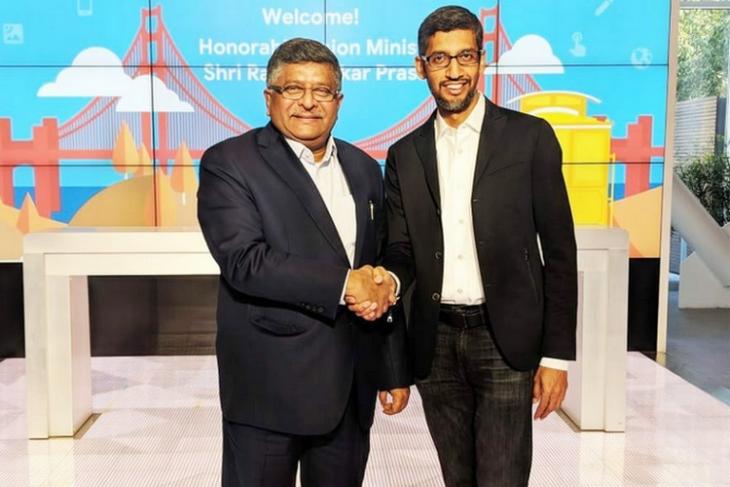 India’s IT Minister, Ravi Shankar Prasad recently met Google’s CEO, Sundar Pichai at the company’s headquarters in Mountain View, California to discuss a wide range of topics such as digital transformation, enabling internet access across the nation and the role technology can play in empowering Indians.

Prasad, who is on an official three-day visit to San Francisco and the Bay Area, discussed initiatives such as the ‘Digital Village’ which can receive a huge boost from Google when it comes to connecting villages with WiFi and supporting the government’s digital literacy program.

During his time at Google’s headquarters, Prasad saw a demonstration of some of the cutting edge technologies Google is working on, and how the company is exploring ways to invest in India through segments such as enhancing the connectivity infrastructure, work on Indic languages, AI and the creation of entrepreneurship opportunities for small startups and enterprises.

“Minister said that digital payments have played a pivotal role in the growth of Digital India adding that the Digital India program is very close to PM Modi’s heart and companies like Google could play and important role in digitally empowering Indians”, read an official press release from the Ministry of Electronics & IT.

I felt so pleased to see many Indian professionals working at the @Google campus in California including the CEO @sundarpichai and Ben Gomes, Vice President of Google Search. pic.twitter.com/Pf2feVIJQC

In addition to meeting Pichai, the Indian IT minister also held discussions with executives of top tech companies in the United States like Microsoft, GE and Intel among others, discussing business and investment opportunities in India and invited them to strengthen their partnership with the country for growth opportunities. Prasad also talked about ‘the emerging data security issues in India and emphasized that the government was cognisant of the need to strike a balance between data availability, data anonymity, data innovation, data security and data privacy’ in the country.

Don’t Regulate Us for the Sake of It: Sundar Pichai