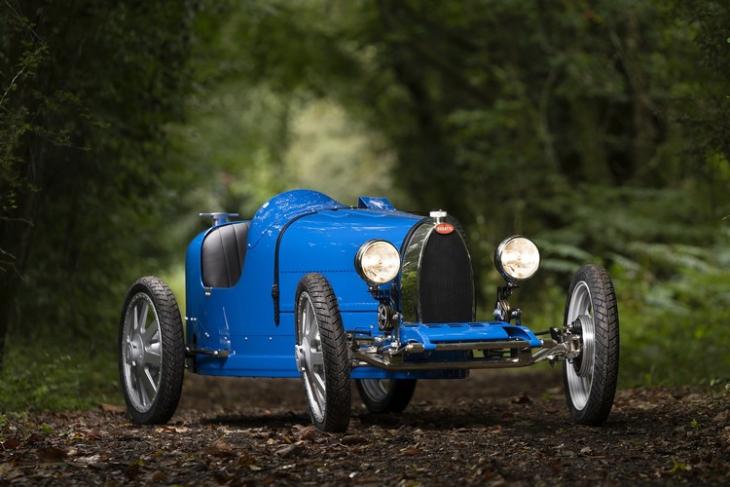 When we think of Bugatti car, the first thing that comes to mind is an expensive, fuel-powered, high-performance car that we play with, in racing games. However, what most people do not know is that the company’s founder, Ettore Bugatti made an electric Bugatti car way back in 1931. It was the “Type 56” car and since then, the company has never made an EV, until now.

According to recent reports, the France-based supercar-makers recently launched an electric “toy” car, the Baby II. It is primarily for kids, however, as per the reports, adults can drive it too if they want a short ride in a car that looks straight outta 1920s!

The Birth of the “Baby” Cars

Back in 1920, Ettore Bugatti made the company’s first racing car, the Type 35. The car won several professional and amateur races over the course of years. Now, fast forward to 1926, on the special occasion of his youngest son’s birthday, Bugatti developed a half-scale “Type 35”. It was a birthday present for his son, Roland. And that is the birth of the company’s “Baby” car models, that sold between 1927 until 1936.

So now, to celebrate the company’s 110th birthday, Bugatti unveiled the Baby II which is a 75 percent scale of the founder’s masterpiece, the “Type 35”. However, unlike the Type 35 that ran on fuel, this “Baby” runs on electric motors powered by a battery.

Now, the Baby II comes in three models — Base, Vitesse, and Pur-Sang. The base version of the car comes with a composite body and a 1.4kWh battery that provides 1.3 horsepower when driving in “Novice Mode”. However, the “Expert Mode” increases the amount of horsepower to 5.8 bhp.

Coming to the range of the “Baby II” cars, the range will vary from 15 to 31 miles per charge. However, there is a way to easily take out the battery pack and install a new one So, when they run out of charge, users can change a battery pack instead of charging the dead battery.

You can check out the “Baby II” models on Bugatti’s official website.