Airtel has been reeling from cut-throat competition courtesy Jio, and in a bid to consolidate its lead in the Indian telecom market, the company has been releasing data packs and bundled vouchers at attractive price points in a steady stream. And now it’s going after those customers who are yet to jump on to the 4G bandwagon, before they port or move over to Jio. The company has launched a new initiative that offers 30GB of free data to all users who upgrade to a 4G smartphone.

Airtel’s new ‘Mera Pehla Smartphone’ program will reward 30GB of free prepaid/postpaid data to all users who switch to a 4G smartphone and upgrade to Airtel’s 4G network from its 2G/3G telecom services. 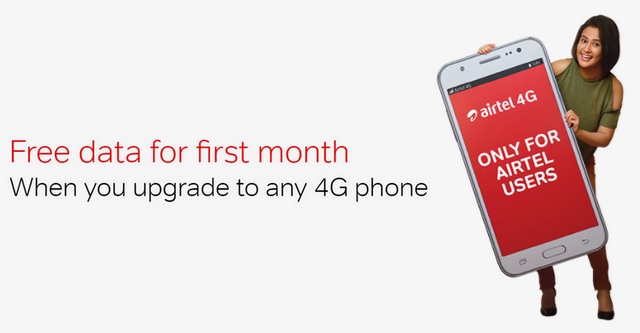 “While 4G smartphones are fast becoming the norm, for millions of customers with feature phones/ 3G devices the upgrade to a 4G smartphone is a big decision and a long term investment. This is one of the largest customer rewarding programs & with this initiative our customers shall get an opportunity to experience the online world at 4G speeds and fully unlock the potential of their smartphones.”, said Airtel’s CMO, Vani Venkatesh regarding the program.

As part of the ‘Mera Pehla Smartphone’ program, all users who have been an existing Airtel 2G/3G subscriber for over 90 days can upgrade to Airtel’s 4G network and avail the free data benefit. Airtel prepaid customers will get 1GB of free 4G data per day for a span of 30 days, while postpaid subscribers will get the net 30GB free data for their first billing cycle which can also be carried over to the next month’s billing cycle.

Users can check their eligibility for the offer by dialing 51111, and if they are eligible for the program and choose to activate the Airtel 4G services, the data benefit will be credited to their mobile number within the next 24 hours. However, the offer can be availed only once on an Airtel number, and in case someone buys an old 4G smartphone, the offer can be availed on a single IMEI number only once in 30 days.