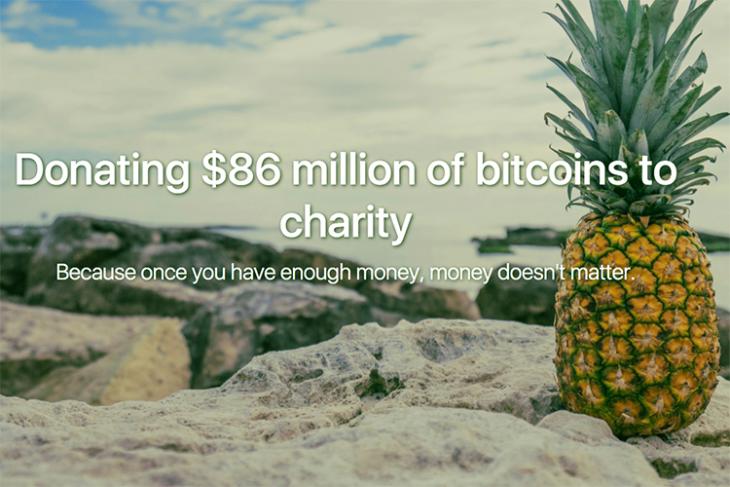 Bitcoin philanthropist who goes by the alias of “Pine” recently set up a $86 million charity fund called the “Pineapple Fund” to donate the wealth he made by mining the cryptocurrency.

Remaining committed to their pledge, Pine has now given away $1 million in Bitcoin to the Internet Archive which is an online community that conserves millions of e-books, audios and videos from the yesteryears of the internet.

The Internet Archive functions as a non-profit which owns a library of nearly 15 million books, over 3.7 million images, and more than 0.18 million sound clips. The database also contains audiobooks from LibriVox, feature films, patent documents, radio broadcasts and collectibles related to the US-Iraq War. The organization is on a mission to ensure “permanent access” to everything uploaded to the internet over the last 20 years.

This is the 14th donation from the anonymous donor who “saw the promise of decentralized money and decided to mine/buy/trade some magical internet tokens“. Pine was among the early adopters of Bitcoin and has even created their own cryptocurrency which they refrains from naming. As part of the Pineapple Fund, the crypto-wizard desires to donate for endeavors in mental health, medical research, ecological conservation, open source and fighting against sexual abuse and violence and has already donated over $15 million.

Pineapple Fund looks to answer a critical question – what use is having more money than you can use? The “expectation-shattering returns of bitcoin” made Pine one of the top 250 richest bitcoin holders and inspired them to donate most of their earning. The recent recipient – Internet Archive – showed its gratitude to the unidentified angel by lauding them in a blog post and remarking,

We so admire this donor using Bitcoin as the currency of giving this season, and are honored to be the recipients of such a gift. Whoever you are, you are doing a world of good.