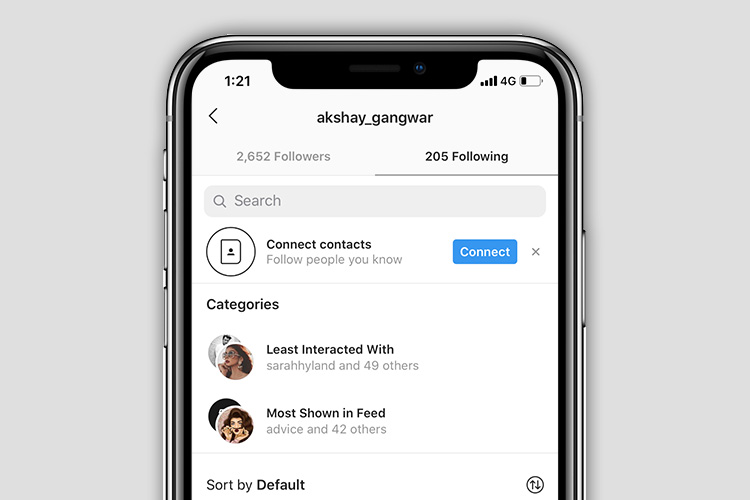 Instagram has just started rolling out a new feature that will make it easier for users to ‘unfollow’ people they find irrelevant. In a tweet earlier today, the Facebook-owned photo-sharing platform said that users can access the feature via the ‘Following’ tab on their profile. Tapping on the tab will show which Instagram accounts show up in your feed the most and who you interact with the least. Based on that info, users will now be able to easily unfollow irrelevant accounts.

Apart from making the task of unfollowing easier than ever, Instagram is also offering more granular controls to users about sorting their accounts. According to the company, users will now be able to sort accounts based on when they started following them, starting from the earliest to the latest and vice versa.

Want to see which Instagram accounts show up in your feed the most and who you interact with the least? Now you can! Just tap “Following” and manage your list from there. pic.twitter.com/eKFOBCdutr

In a statement to TechCrunch, an Instagram spokesperson said that the changes will make it easier for users to keep a tab on how they manage their accounts. According to them: “Instagram is really about bringing you closer to the people and things you care about, but we know that over time, your interests and relationships can evolve and change … we want to make it easier to manage the accounts you follow on Instagram so that they best represent your current connections and interests”.

The latest changes will not only help users to manage their accounts and figure out who to unfollow, it might also help Instagram boost revenues by increasing the density of posts that users will actually find interesting, thereby encouraging them to spend more time on the app. While it may be a win-win for both Instagram and most of its general users, it will be interesting to see if it will significantly affect the follower counts of some of the influencers on the platform.

This Instagram Filter Will Turn You Into Apex’s New Legend