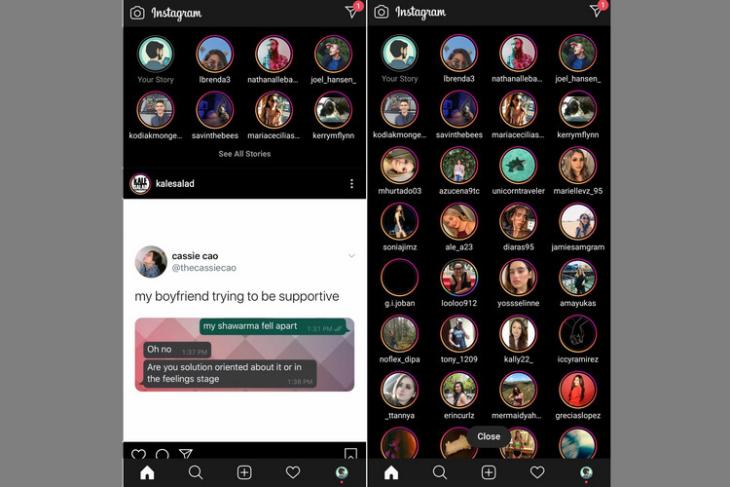 Instagram is testing a major overhaul of the ‘Stories’ carousel to make it a central focus in the mobile app. Believed to have been first spotted last week by the social media manager for AdWeek, Julian Gamboa, the feature will enable users to see all Stories at once, both on the Home screen as well as in a new Stories-only experience.

As part of the plan, the single row of scrollable Instagram Stories is being replaced with a two-row carousel. Beneath those two rows, there will be a ‘See all Stories’ button. Tapping on that will expand the Stories section full-screen.

Instagram has confirmed to TechCrunch that the new format is being tested with select users. The company further said that it has been live for more than a month. However, there’s no word on when it will be rolled out universally.

The first signs of Instagram testing a redesigned Stories carousal emerged back in late May. Back then, reports suggested that the Facebook-owned company may be looking to replace the single row of Instagram Stories with a two-row design. However, there was no indication back then that the company is planning to make it the central focus of the app itself.

It is not entirely a surprise that Instagram is paying so much importance to Stories. Even though it was originally cloned from Snapchat, the Stories feature has since become a massive hit among IG users. That said, some users will definitely not like the impending change. So it will be interesting to see how the company will address their concerns before moving forward with the redesign.