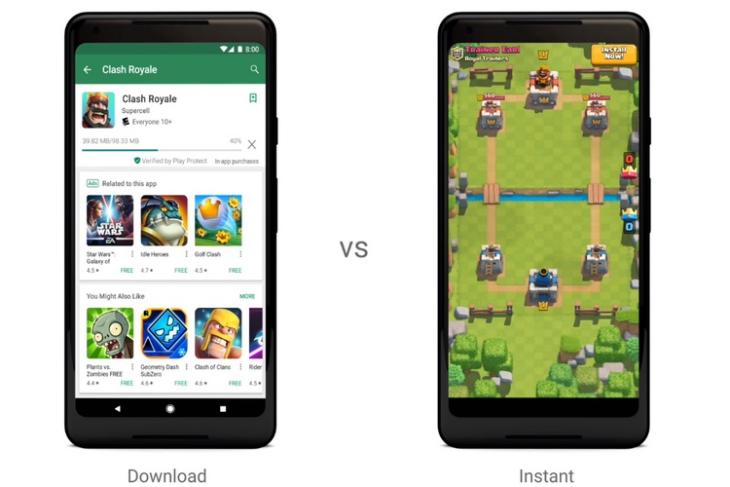 Google kicked off Game Developers Conference (GDC 2018) by introducing a new feature called Google Play Instant, which should be a massive boost for game developers.

With Play Instant, users would be able to play a short demo of a game before downloading it. The Google Play Instant tool has been introduced with the goal of easing the process of game discovery, and reducing the instances of users installing and uninstalling a game quickly afterwards, which damages app metrics and analytics.  For consumers or end users, it’s a great way of testing a game, before installing it, saving some data and also time. It also gives you a better idea of the ads and in-app purchases before you dive in to the full game.

With Google Play Instant, you can just tap and try a game without having to download it first.

As per an official blog post, Google Play Instant will be available in the Google Play Store, Google Play Games app and all other places where the game links that support the feature are shared. The newly announced feature is now available in the Instant Gameplay section of the Google Play Store, however, there are only six games available right now that allow players to test a demo before downloading the title. Final Fantasy XV: A New Empire, Bubble Witch 3 Saga, and Clash Royale are among the new games which currently offer the try-first-download-later functionality.

Google’s blog post mentions that more games will get support for the Google Play Instant feature later this year across all the supported app listing platforms. Aside from the new feature, Google has also redesigned the Google Play Games app, whose Arcade section now features trailers of games, and has also gained support for performing directory search using tags like ‘New’ or genre keywords like ‘Action’ for discovering games.

Introducing Google Play Instant in the all-new Play Games App Arcade. Get it, test it, play it. 🎮 #GoogleGDC18 https://t.co/mIiUSbNneX pic.twitter.com/boyGokmXN6

Moreover, news and YouTube videos related to a game will also be showcased in the Google Play Games app for players to gain more information about their favorite game and polish their skills. Lastly, Google has also introduced some new tools to the Google Play Console platform used by developers to create Android games. A new internal testing track in the game development platform will let developers test new games at an enhanced pace, allowing them to make their game available for up to 100 testers within a few seconds.