Asus ZenFone 5Z (₹29,999) is a great smartphone on paper as it brings the top of the line hardware specifications despite costing less than half the price of a normal flagship device. In fact, this is the first time when a smartphone was able to undercut OnePlus’ offering in the affordable flagship market. That said, we all know that affordable flagship devices might match a flagship device in performance, however, they do falter when it comes to the camera quality. That’s why we wanted to see if the Asus ZenFone 5Z follows the norms or defies them to match the best of the best smartphones out there. Well, if you too want to find that out, tag along as we bring you the Asus ZenFone 5Z camera review to see what its optics are made of:

Just like most of the other modern flagship devices out there, Asus brings a dual-camera sensor at the back. Talking specifics, the primary camera at the back brings a 12MP f/1.8 sensor along with an 8MP f/2.0 sensor. However, unlike others, the secondary sensor on this phone is a wide-angle lens and not a telephoto one which personally makes me happy. It also means that if you prefer the telephoto lens, this might not be the phone for you. Coming to the front, the phone brings an 8MP sensor with f/2.0 aperture which should easily take care of all your selfie needs. Now, that we know about the specs, let’s see how they perform in real life situations:

I am happy to report that in good lighting conditions, the cameras perform really good. I mean, just look at the photos below. They all look beautiful, don’t they? There’s plenty of exposure, good dynamic range, and the photos have good details. Even the color reproduction is on point in most of the cases. I mean, there are times when the AI detection kicks in and oversaturate the photos, but, depending on your preference, that might not be such a bad thing. In short, other than the AI fiasco, I was quite happy with the phone’s performance in good lighting conditions.

Now, let’s talk a little bit about that 8 MP wide-angle lens at the back. As I mentioned above, I generally prefer wide-angle lens over the telephoto lens as they allow me to take cool photos. That said, while it does that, the photo quality itself is not that great as there is a lot of noise in the photos. I mean, just see for yourself. 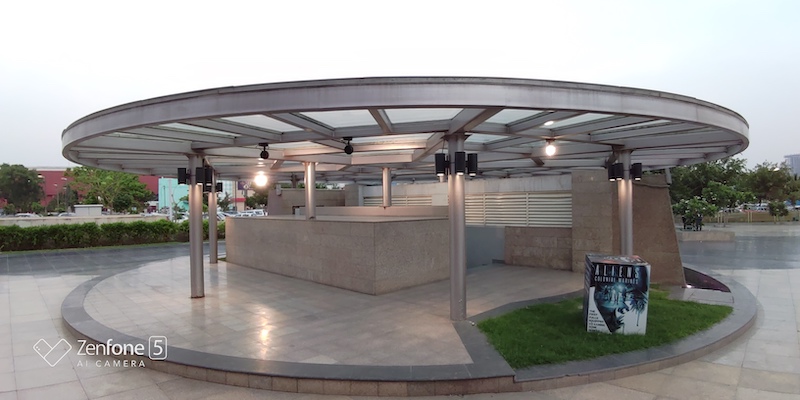 Now, let’s check out some low light photos to see how the camera performs in low-lighting conditions. Checking the pictures below, you can see that this is where the problems begin for the ZenFone 5Z. I mean, the camera does capture a lot of light but the focus never seems to be on point. It’s like the sensor is trying so hard to brighten up the images that it’s forgetting what it was asked to capture in the first place.

The over brightening also resulted in the background lights getting too much exposure. The phone is basically unable to distinguish between the different parts of the shots and just brightening everything up, which feels a lot like applying a filter. Sure, some photos turned out fine but it’s more like an accidental bullseye. Overall, the camera performance in low-light situations is just disappointing.

The portrait shot performance just repeats what we have seen by now. What that means is that in day-light or good lighting conditions, the shots came out to be good. The shots are nothing exceptional, but also not that bad. I mean, they are passable for your social media sharing needs, but you won’t be taking them inside Photoshop for extensive retouching.

That said, the performance takes an exponential dip when the ambient lighting conditions are not that good. Every low light problem that we discussed in the normal mode is amplified here. Since the phone forgets where to focus in low-light, the edge detection is completely messed up, and the background blur is really unnatural. Before you say that you can adjust the blur, I would tell you that we tried that and the problem still persisted. In conclusion, portrait shots are a no go in low-light.

On the video front, the ZenFone 5Z comes with EIS plus OIS with the ability to shoot videos up to 4K@60FPS. While the video quality is good enough, the camera did show some problems in focusing. At 1080p, the videos are very stable but the focusing problems still persist. So, it’s all pretty average. You might be noticing a pattern here. The main problem the cameras are experiencing has to do with its focus. I just hope that this problem doesn’t have to do with the sensors used in the phone.

I was hoping that the selfie camera on this phone would be better than its primary camera, however sadly, that’s not the case. The problems of the rear camera persist in the front as well which means the daytime selfies came out to be pretty good. But as soon as you move to low light and portrait shots, the phone starts messing up again. The main problem with the selfie camera turned out not to be the focusing problem but the overall lack of details. The details are just not there and selfies also showed more than usual noise. If you are a selfie lover, you will have to either stick to taking them in good lighting conditions or look at other phones.

I was really rooting for Asus to pull off something that no smartphone has been able to do till now. Sadly, instead of breaking the trend, the Asus ZenFone 5Z outright disappointed us. In fact, comparing it to the OnePlus 6’s camera performance, I found the OnePlus 6 to be a superior camera phone than the ZenFone 5Z. Overall, the ZenFone 5Z has rather average cameras and it definitely does not put up much of a fight against the OnePlus 6. Barring the daytime photos, the ZenFone 5Z cameras just failed to impress us. If camera quality matters most to you, this is not the phone I can recommend. I just hope that Asus can fix these problems with a software update, as if the company fails to do so, it is going to lose a chunk of its prospective customers.